Stars and Stripes could cease publication on Sept. 30 without DoD funding, lawmakers warn

'If publishing is discontinued and there is an order to dissolve the organization then there will be a phasing of staff separations.' 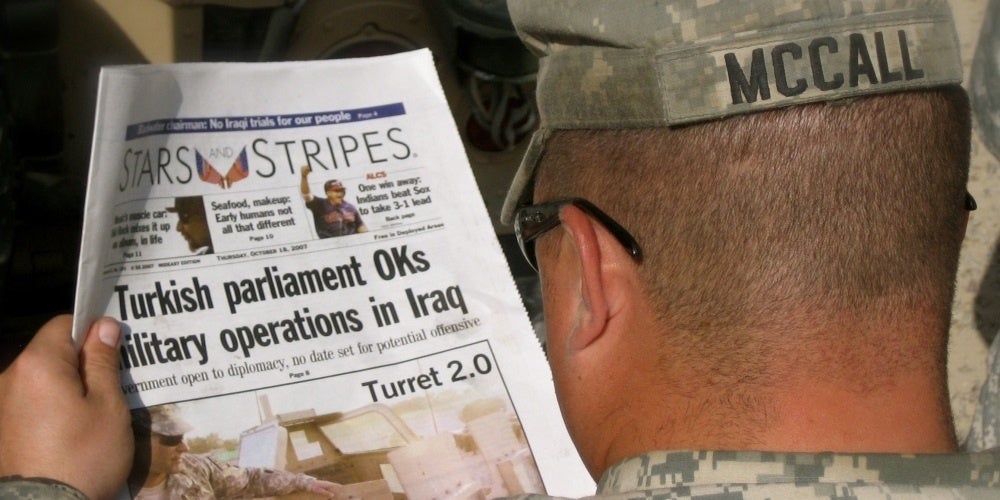 Stars and Stripes, the U.S. military’s editorially independent newspaper, could be shuttered at the end of the month and disappear altogether early next year, according to a letter sent Wednesday from 15 senators to Defense Secretary Mark Esper.

The Pentagon acknowledged in February that it had eliminated all funding for Stars and Stripes – roughly $15.5 million – from its Fiscal 2021 budget request. Esper later told reporters the department needed to invest money meant to fund Stars and Stripes “into higher-priority issues.”

(Disclosure: This reporter worked for Stars and Stripes from August 2005 until December 2011).

Currently, the Defense Department plans to cease publication of Stars and Stripes on Sept. 30 and dissolve the organization by Jan. 31, 2021, according to the 15 senators, who asked Esper to keep funding Stars and Stripes while lawmakers work to restore the newspaper’s funding.

“Stars and Stripes is an essential part of our nation's freedom of the press that serves the very population charged with defending that freedom,” the senators wrote. “Therefore, we respectfully request that you rescind your decision to discontinue support for Stars and Stripes and that you reinstate the funding necessary for it to continue operations.”

Stars and Stripes is an essential part of our nation’s free press that serves the very population charged with defending our freedoms. The Defense Department should reinstate funding so @StarsandStripes can continue to operate. Read our bipartisan letter: pic.twitter.com/k3KzAZ4hun

If the Defense Department does not comply, Stars and Stripes’ future would be uncertain. The gears of Congress move very slowly and given lawmakers’ history of passing defense spending bills well after Sept. 30, it could be several months before Congress actually votes on the Pentagon’s budget. (Congress approved the Defense Department’s fiscal 2020 budget in December 2019, three months into the fiscal year.)

As things stand now, the House version of the Fiscal 2021 National Defense Authorization Act includes about $15.6 million for Stars and Stripes but the Senate version of the bill has no funding for the newspaper. Lawmakers are expected to resolve differences between the two versions of the bill later this year.

Meanwhile, the Senate has not voted on the fiscal 2021 appropriations bill, nor has it negotiated a final version with the House, “Leaving it as a real possibility that Congress may not agree with the proposal to eliminate this funding,” the senators wrote.

The senators also asked Esper for “written assurance” that he will not cancel any programs if Congress passes temporary spending measures to fund the government while it negotiates an appropriations bill for the full year.

Star and Stripes has been troops' source for news dating back to the Civil War. More recently, it has been providing service members and their families with free coverage about how the novel coronavirus (COVID-19) is affecting military installations, including Defense Department schools.

The newspaper's publisher Max Lederer said Stars and Stripes plans to continue publishing beyond Sept. 30 if Congress passes a continuing resolution to temporarily fund the government.

Lederer was unable to say exactly when Stars and Stripes would be forced to cease publication if it does not see its funding restored.

Many factors apply including whether the newspaper receives any money as part of a temporary spending measure passed by Congress and if the economic downturn and the COVID-19 pandemic hurt revenue, he said.

Should the Defense Department carry through with its plans to disband Stars and Stripes, the newspaper will have to let its staff go, Lederer said.

“If publishing is discontinued and there is an order to dissolve the organization then there will be a phasing of staff separations,” Lederer said in an email.

Related: The Pentagon Literally Has More Money Than It Knows What To Do With