The Pentagon wants to slash funding to Stars and Stripes

'We essentially decided that – kind of coming into the modern age – that newspapers are probably not the best way that we communicate any longer,"' said the Pentagon's acting comptroller Elaine McCusker. 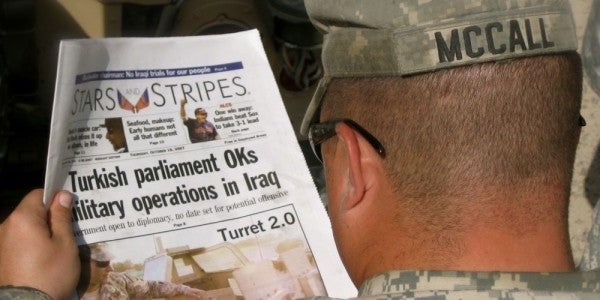 The Defense Department plans to cut funding for Stars and Stripes, the editorially independent newspaper for U.S. troops and their families overseas.

“We essentially decided that — kind of coming into the modern age — that newspapers are probably not the best way that we communicate any longer,” the Pentagon's acting comptroller Elaine McCusker said during a briefing Monday about the Defense Department's budget request.

The decision to cut funding for Stars and Stripes came as a result of a Defense Department wide review that looked at trimming costs, said McCusker, who could not say exactly how much the Pentagon wants to cut the newspaper's subsidy by.

(Disclosure: This reporter worked for Stars and Stripes from August 2005 until December 2011).

Stars and Stripes publisher Max Lederer said he was notified on Monday that the Defense Department plans to eliminate all appropriated funding for the newspaper starting in fiscal 2021.

“Consequently, I have just begun to evaluate the impact to operations,” Lederer told Task & Purpose. “The loss of funding to support the Stripes mission around the world will definitely reduce the ability of the Stripes staff to gather, produce, and deliver the content needed and desired by the military community. The men and women who sacrifice every day for the safety of our nation deserve the objective and balanced unique content produced by Stars and Stripes.”

Lederer said in a Stars and Stripes story that the Pentagon plans to cut $7 million from the newspaper's budget, or about 35% of its annual expenses.

Stars and Stripes is often the only source of information to deployed service members, especially since the Defense Department has begun preventing troops from taking their cell phones with them when they go downrage.

The newspaper first published during the Civil War and it has served troops continuously since World War II. It is available both in print and online.

Past defense secretaries have tried to phase out Stars and Stripes but the newspaper has traditionally enjoyed strong support in Congress.

Wall Street reporter Gordon Lubold first reported on Sunday that the Defense Department plans to cut Stars and Stripes' funding as part of an effort to transfer $5 billon to higher priority projects.

“There were no previous discussions with the organization before today's announcement,” Stars and Stripes editor Terry Leonard told Task & Purpose. “We have not had time to do an assessment. But it seems likely it will have a large impact on our ability to provide the fair, balanced and often unique content about and for our military audience that our readers have a right to expect.”