Every generation gets the overblown euphemism for geopolitical adversaries it deserves 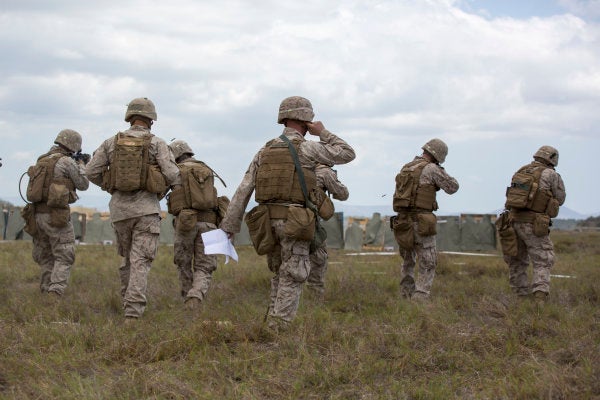 Every generation gets the overblown euphemism for geopolitical adversaries it deserves. In the aftermath of the September 11th attacks, it was President George W. Bush's “Axis of Evil” in reference to North Korea, Iran and Iraq; in the last few years, the Defense Department has fretted over “Great Power Competition” with Russia and China.

Now, the head of U.S. Southern Command is looking to introduce a delicious new catchphrase to the Pentagon's lexicon: “vicious circle of threats.”

During his testimony before the Senate Armed Services Committee on the command's current posture, SOUTHCOM commander Adm. Craig S. Faller cautioned that growing Russian and Chinese interference in the Western Hemisphere had ended up cultivating increased corruption and oppression in countries like Venezuela, a trend that could end up exacerbating regional security concerns in the region.

“These malign state actors are part of a vicious circle of threats that deliberately erode stability and security in the region,” Faller said in his opening statement.

“The vicious circle is framed by systemic issues of young democracies, often with weak governance and porous legal frameworks, exacerbated by a propensity towards patronage and corruption that is deliberately exploited” by both external state actors like Russia and China and non-state terror organizations, he added.

With Defense Secretary Mark Esper hinting at a global force repositioning this year to better counter Russia and China — an announcement made during a recent trip to Miami to review U.S. military missions in Latin America — it's clear that Faller is making the case that this “vicious circle of threats” requires more, not less, resources for SOUTHCOM.

“This vicious circle continues to negatively impact our homeland, most acutely in the form of illegal immigration and illicit drug flows, but also in other, more harmful wars,” Faller said.

“Due to high levels of insecurity and frustration with government corruption, support for democracy and democratic institutions in Latin America and the Caribbean is at its lowest levels in 15 years, providing further openings for malign state actors to increase their influence. A number of countries are experiencing democratic backsliding, with others sliding towards outright authoritarianism.”

But apart from jockeying for precious, precious Pentagon funding, Faller (or some public affairs officer) is apparently testing out a brand-new catchphrase to hoist to the DoD rafters alongside the likes of “lethality.” Indeed, Faller has bandied about the phrase before, using “vicious circle of threats” to describe “the subversive influence of malign actors (China, Russia, Iran, Venezuela and Cuba)” in the Western Hemisphere in a September op-ed in Defense News:

The vicious circle works like this: With every illegal activity, criminals and violent extremists undermine rule of law and stability. We feel the impacts in our homeland, in the form of illegal drugs that cost our families and our nation tens of thousands of lives and billions of dollars every year. Our neighbors feel the impacts as violence and corruption cost lives, limit economic growth and erode the rule of law. Instability and violence fuel migration crises that strain social and legal systems. External and malign state actors who seek to shape a world consistent with their authoritarian models exploit these conditions to expand their influence.

And then there's this, from a November interview with Voice of America:

There's a vicious circle of threats that affect the security of the United States that jeopardize a peace and prosperity and democracy right here in our neighborhood. Right here. And that vicious circle is on young governments. These are young democracies, civil wars within our lifetime right here. They have young, emerging institutions, and institutions are the strength of our democracy, like the United States military. They're susceptible, these young institutions here, to corruption. They're susceptible to transnational criminal organizations, which breed on corruption and will deal in anything they can to make themselves a buck and stay powerful and strong. And they're often better funded than the security institutions that they face here. Those external powers that we talked about — China, Russia — they thrive on those same sorts of conditions. And that's a threat.

Look, we get it: phrases like “Axis of Evil” and even “Great Power Competition” are often useful phrases for articulating the complex challenges posed by America's geopolitical adversaries. But they're also a great way to put a concrete face on second- or third-order concerns that, though essential, may not carry as much weight as the direct threats of, say, non-state terrorism.

And given that SOUTHCOM must fight for its share of defense spending like every other command, it's no wonder that Faller would want to hone in on a coherent subject of concern in making his case for more resources.