The Pentagon is sacrificing F-35s and other weapons systems to find $3.8 billion to fund the border wall

The Navy is sacrificing two F-35Bs, two V-22s, and one P-8A Poseidon to pay for the border wall. The Air Force is losing four C-130J Hercules and eight MQ-9 Reapers. 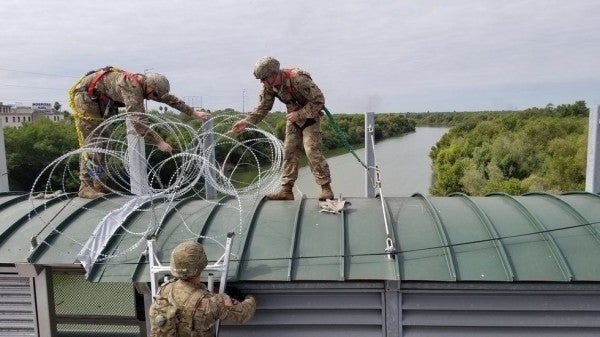 The Defense Department has determined President Donald Trump's border wall is more important than the F-35s, ships, and drones.

On Thursday, Congress received an explanation from the Pentagon about how it plans to shift $3.8 billion to pay for more wall along the U.S. border with Mexico.

About $2.2 billion would be siphoned from money that was supposed to buy F-35s and other weapons systems according to the document provided to Congress, which was obtained by Task & Purpose. Another $1.6 billion would come from the U.S. military's overseas contingency operations budget, part of which funds wartime expenses.

In total, the Navy is sacrificing two F-35Bs, two V-22s, and one P-8A Poseidon to pay for the border wall, the document says. It will lose an addition $911 million from its shipbuilding account. That money would have gone toward the landing helicopter assault ship replacement and the expeditionary fast transport.

These cuts come as the Navy also plans to make steep cuts to shipbuilding in its fiscal 2021 budget. It expects to purchase one fewer Arleigh Burke-class destroyer and Virginia Class submarine than originally planned.

The Air Force will lose $156 million that would have gone to buy F-35s in the future, another $180 million for the observation attack replacement light attack aircraft program, and four C-130J Hercules aircraft and eight MQ-9 Reapers.

In addition, the Army is giving up $100 million for its Humvee modernization program and another $101 million for trucks.

Meanwhile, the National Guard and Reserve will lose a total of $1.3 billion that had been slated for equipment.

So far, the Defense Department has not commented on its plans to transfer the $3.8 billion for the border wall.

Rep. Mac Thornberry, the ranking Republican on the House Armed Services Committee, has objected to “diverting critical military resources that are need and in law” to pay for the border wall.

Once Congress has appropriated money to the Defense Department, the Pentagon cannot change how those funds will be spent without lawmakers' approval, Thornberry said in a statement on Thursday.

“Attempts to do so undermine the principle of civilian control in the military and is in violation of the separation of powers within the Constitution,” Thornberry said. “The re-programming announced today is contrary to Congress's constitutional authority, and I believe that it requires Congress to take action. I will be working with my colleagues to determine the appropriate steps to take.”