Jon Stewart to Pentagon: The F-35 can wait, but troops dying from burn pit exposure can’t

Jon Stewart, the former host of Comedy Central's "Daily Show" took to Capitol Hill to rail against the federal government's insistence that building a fleet of newfangled jets (some which don't work) is a better use of taxpayer dollars than caring for our wounded and ill. 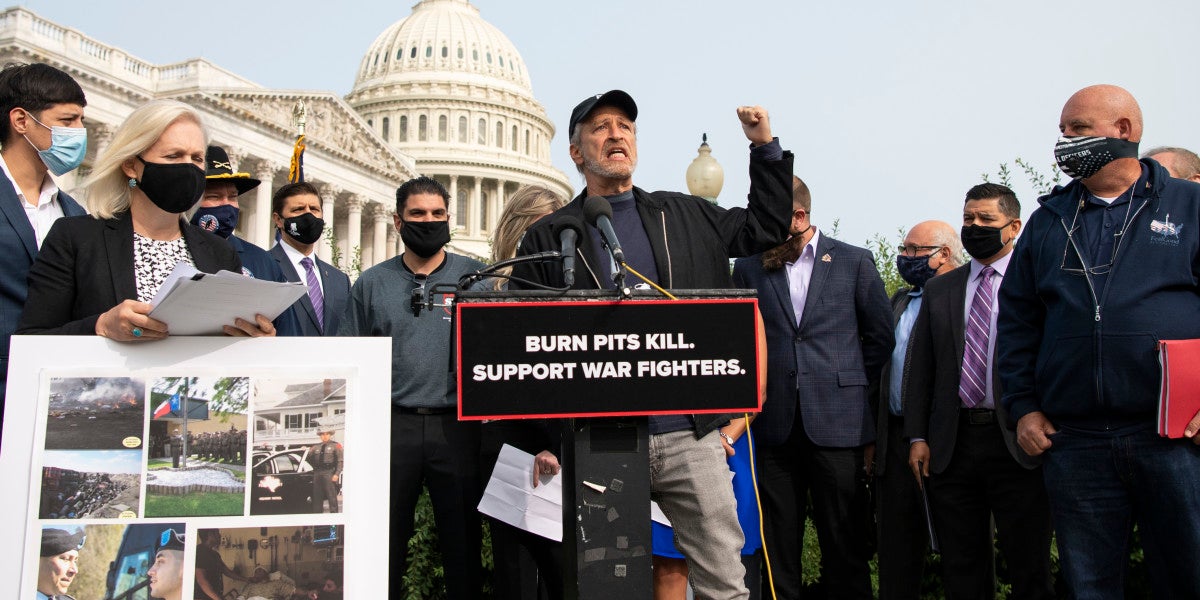 “Welcome to another exciting episode of, ‘When is America going to start acting like the great country we keep telling ourselves we are?’” said Jon Stewart, the former host of Comedy Central's Daily Show, at a press conference on Tuesday in Washington, D.C.

Flanked by veterans, their families, and advocates, Stewart spent several minutes railing against the federal government's insistence that building a fleet of newfangled jets (some of which don't work) is a better use of taxpayer dollars than caring for our war-wounded and ill.

Specifically, Stewart was advocating for troops whose health has deteriorated dramatically or died due to their exposure to open-air burn pits, a mainstay of post-9/11 military deployments.

“The A-10 already takes care of everything, it could possibly take care of. The F-35 is gonna be useless,” Stewart said. “They're gonna make 2,400 of them for 1.4 trillion dollars. Just make 2,000 of 'em. And we have the money. This is bull—t, the money is already in the system, we're just not allocating it to the right people.”

Jon Stewart, American hero, and defender of the A-10 Thunderbolt II. pic.twitter.com/dqnqqhHDII

Currently, the Department of Veterans Affairs only attributes a limited range of temporary health effects to burn pit exposure. Add to it that the department's disability compensation system places the onus on veterans to prove that their decline in health is attributable to toxic exposure during military service.

Between 2007 and 2018, more than 11,000 claims were filed for illnesses believed to be caused by burn pit exposure — 80% of those claims were denied by the VA according to Disabled American Veterans.

A new bill introduced this week, The Presumptive Benefits for War Fighters Exposed to Burn Pits and Other Toxins Act, aims to change that.

Stewart made his comments during a news conference with Sen. Kirsten Gillibrand (D-N.Y.) and Rep. Raul Ruiz (D-Calif.) on Capitol Hill on Tuesday. The two lawmakers are sponsoring legislation that would treat exposure to burn pits as a “presumptive” condition for any veteran of the wars in Afghanistan or Iraq and in turn force the VA to cover exposure-connected illnesses.

This is not the first time that Stewart has taken to Capitol Hill to demand the federal government make good on its promise to care for those who risked life, and their longterm health, for their country.

In June 2019, Stewart made an impassioned plea to Congress when he testified on behalf of 9/11 first responders to advocate for permanent funding of the post-9/11 Victim Compensation Fund.

Stewart's speech comes one day after the story of Patrick Duva was widely shared across military social media accounts. The family of the former Marine corporal, who was recently placed in hospice care, has attributed his deteriorating health to burn pit exposure in Afghanistan.

To say that burn pits were widespread, and consequently, the risk of exposure high is about as obvious as saying that Afghanistan and Iraq are hot in the summer. (For some context, since Sept. 11, 2001, as many as 3.5 million troops are estimated to have been exposed to open-air burn pits, and more than 200,000 veterans are enrolled in the Department of Veterans Affairs Burn Pit Registry.)

Given the nature of deployment during the height of America's most recent, and longest-running wars, and the necessities of security, establishing burn pits that were far enough way that there was no risk of exposure was rarely a top priority.

And so, burn pits were often set up where there was room, whether that meant a 10-acre smoldering mountain of refuse at Balad Air Base in Iraq, or a ditch on the other side of the berm from your hooch at a small patrol base in Helmand province, Afghanistan.

“And we’re here today to say we’re not going to let this happen in the dark.”