USS Dextrous sailors say their captain has made the ship a ‘miserable prison.’ The Navy doesn’t seem to care

"Honestly we need an entirely new wardroom from Captain down" 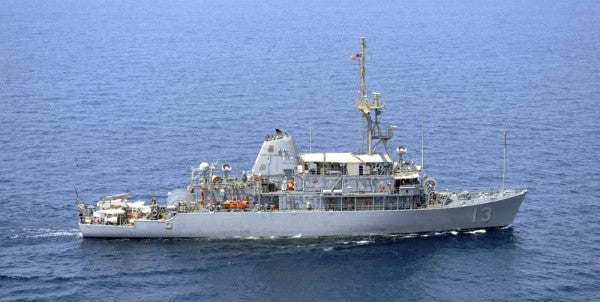 A recent climate survey has revealed that many sailors aboard the minesweeper USS Dextrous do not trust their captain and feel they have been worked beyond the breaking point.

“My Captain is disengaged from the crew,” one anonymous respondent wrote for the June 9 command climate survey, which was obtained by Task & Purpose. “Everyone else struggles to survive day to day. This place is a miserable prison.”

Based in Bahrain, the Dextrous has been under the command of Lt. Cmdr. Jordan J. Stutzman since February 2019.

The recently-conducted Defense Organizational Climate Survey Report painted a picture of a toxic command climate aboard the Dextrous. Several sailors claimed Stutzman failed to keep them safe from hazing or acts of violence by the ship’s former chief engineer, who allegedly struck another sailor and was not punished.

“[The] chief engineer will harass you and bully you,” one sailor wrote. “Only way he is still here is because people are afraid to say something. The guy spent months trying to set up old XO [executive officer] and succeeded. Then openly brags about it and jokes about it with CO. Unreal.”

Of the 60 sailors aboard the Dextrous, 40 crew members responded to the survey. Only 44 percent of respondents gave the ship’s senior leadership a favorable rating and just 38 percent indicated they were satisfied with their jobs.

“The Department of the Navy takes information received from the Defense Equal Opportunity Management Institute (DEOCS) survey very seriously,” Ivey told Task & Purpose on Friday. “The chain of command reviewed the results and an investigation was conducted. The concerns from the survey were addressed.”

The climate survey includes the disclaimer: “Management or disciplinary actions should not be taken based solely on the results of this report.”

It does not appear that Stutzman will face any adverse actions at this point.

“The chain of command has confidence in USS Dextrous (MCM 13) and in the commanding officer’s ability to lead the ship,” Ivey said. “Since addressing concerns from the survey results, the ship has been underway and has performed exceptionally. The ship recently completed a successful two-week United States and United Kingdom mine countermeasures exercise, as the only U.S. representative.”

Beyond the issues with the chief engineer, sailors aboard the Dextrous claimed that Stutzman has the crew constantly working so that he and the ship’s other officers can perform well on their Navy evaluations.

“You watch as other ships enjoy 96 hour liberty, and you wonder why is DEX so special?” one sailor wrote. “Why are we always at work when others are off? Then you remember, it's [fitness report] time. It's always fitrep time for someone.”

With the crew so overworked, conditions board the Dextrous are dangerous, sailors wrote. One crew member wrote about not feeling safe while underway because the ship is “an accident waiting to happen.”

“Many Sailors are being overly tasked to the point that they don't sleep for days at a time, chugging 5-10 energy drinks a day to stay awake and half-doing work,” a sailor wrote. “This is very dangerous doing a job that requires Attention to Detail.”

One crew member wrote that sailors no longer care about doing their jobs well: they just want to get some rest and end their tour “sane and alive.”

Some sailors indicated they no longer hoped that conditions aboard the Dextrous would get better. In response to a question on the climate survey about what the vessel’s leadership could do to improve morale, one sailor wrote: “Sink the ship.”

“Honestly we need an entirely new wardroom from Captain down,” a sailor wrote. “Never seen a group of individuals that are this backstabbing and bad and a CO who doesn't see clearly who the issues are.”

Crew members claimed that Stutzman is constantly thinking of extra work for his sailors to do and that he is more concerned with getting the Dextrous underway as often as possible and passing inspection than with his crew’s welfare.

One sailor wrote that Stutzman unnecessarily ordered his crew to sleep outside the ship in the wind and rain to simulate what it would be like if the Dextrous had to sail through a minefield.

“We know the CO doesn't want to hear bad news and is only concerned about how he looks for the commodores,” one sailor wrote. “I guess CNSS 5 [Commander Naval Surface Squadron Five] and CTF 52 [Commander Task Force 52] will listen when a Sailor dies.”

Related: The Air Force said this colonel was an incredibly toxic leader. Then she was promoted to one-star general