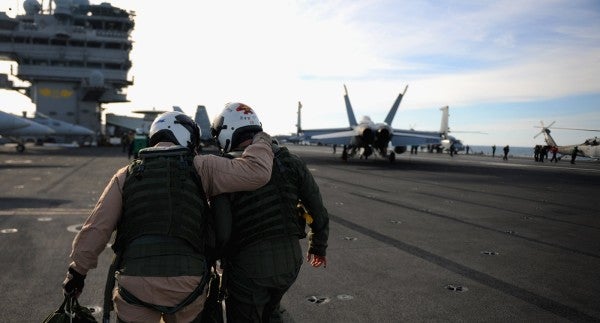 Three sailors assigned to the USS George H. W. Bush have died by suicide in the last week, the Navy announced today.

“Every death of a Sailor is devastating and affects our entire Navy Family,” Cragg said. “Our thoughts and condolences are with the family, friends, and shipmates of the Sailors.”

None of the deaths occurred aboard the aircraft carrier, which is dry-docked in Norfolk, Cragg told Task & Purpose.

“Now is the time to come together as a crew and as a family to grieve, to support each other, and to care for those in need,” reads Bailey's message. The post goes on to note that counseling and support systems are “available on board at all times to provide support and counseling to those grieving,” and encourages sailors to “watch closely for stressors that anyone is experiencing when they face a significant life change such as: Relationship problems; Personal or professional loss; Recent career transitions; Financial difficulties; Disciplinary/legal issues.”

The recent suicides gained widespread attention on social media after they were addressed on Decelerate Your Life, a popular Facebook group geared toward current and former sailors.

According to the group's administrator, who spoke with Task & Purpose under the condition of anonymity, the Facebook page has received messages from 30 to 40 sailors assigned to the Bush, who allege that leadership has tried to downplay the recent suicides, and that there may be a “toxic command climate” aboard the carrier, pointing to issues with long hours, undue stress, and a lack of personal time while the ship is dry docked.

The Navy has pushed back on the claims about the command environment, with Cragg telling Task & Purpose that the “USS George H. W. Bush leadership is committed to every sailor assigned to the ship to join together as a team to improve the quality of their people and themselves.”

However, the page administrator for Decelerate Your Life told Task & Purpose that his account was temporarily blocked from the Bush's official Facebook page after commenting there about the recent suicides. The Navy declined to provide a comment on why the account was blocked.

According to USNI News, “as of Sep. 5, the Navy reported that 46 active duty service members had taken their lives in 2019.”