A deployed Navy cruiser has been rocked by scandal after six chief petty officers — or, nearly a quarter of... 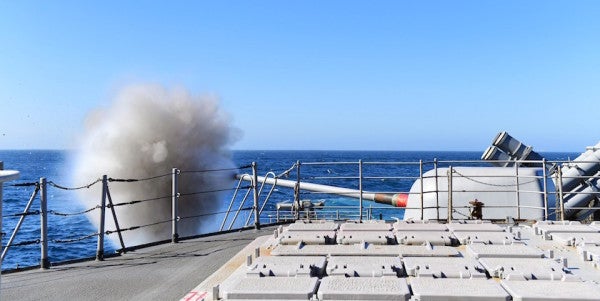 A deployed Navy cruiser has been rocked by scandal after six chief petty officers — or, nearly a quarter of the chiefs on board — were punished by their commanding officer for their involvement in a bizarre love triangle, Navy Times reports.

Two chiefs aboard the USS Hue City were found guilty of fraternization and adultery at captain’s mast by Capt. Daniel Gillen after an investigation substantiated allegations that both were involved in separate adulterous affairs with the same junior sailor, who has since been assigned off-ship.

Four other chiefs were punished for having knowledge of the love triangle but neglecting to report it. They were found in violation of Article 92 of the Uniform Code of Military Justice for failure to report a fraternization offense, according to Stars and Stripes.

Another chief was brought to mast for a separate incident and found guilty of drunk and disorderly conduct and disrespecting an officer during a port visit.

All seven chiefs were punished over a three-day period beginning April 21.

“Whether actively engaging in misconduct or standing by idly and failing to report or correct it — both are degradations to our Navy team and the trust it takes to be successful and will not be tolerated,” Vasquez told Navy Times. “We operate in a very demanding environment and need the best from our people day in and down out.”

The chief’s mess accounts for about 25 to 28 of the approximately 300 enlisted sailors aboard the Hue City. The guided-missile cruiser is currently operating in the Persian Gulf as part of the USS George H.W. Bush carrier strike group, which deployed in January to launch airstrikes against ISIS in Iraq and Syria.

From the looks of it, there’s been no shortage of action.