The Navy’s top enlisted sailor tried to lift the spirits of a beleaguered crew. He didn’t 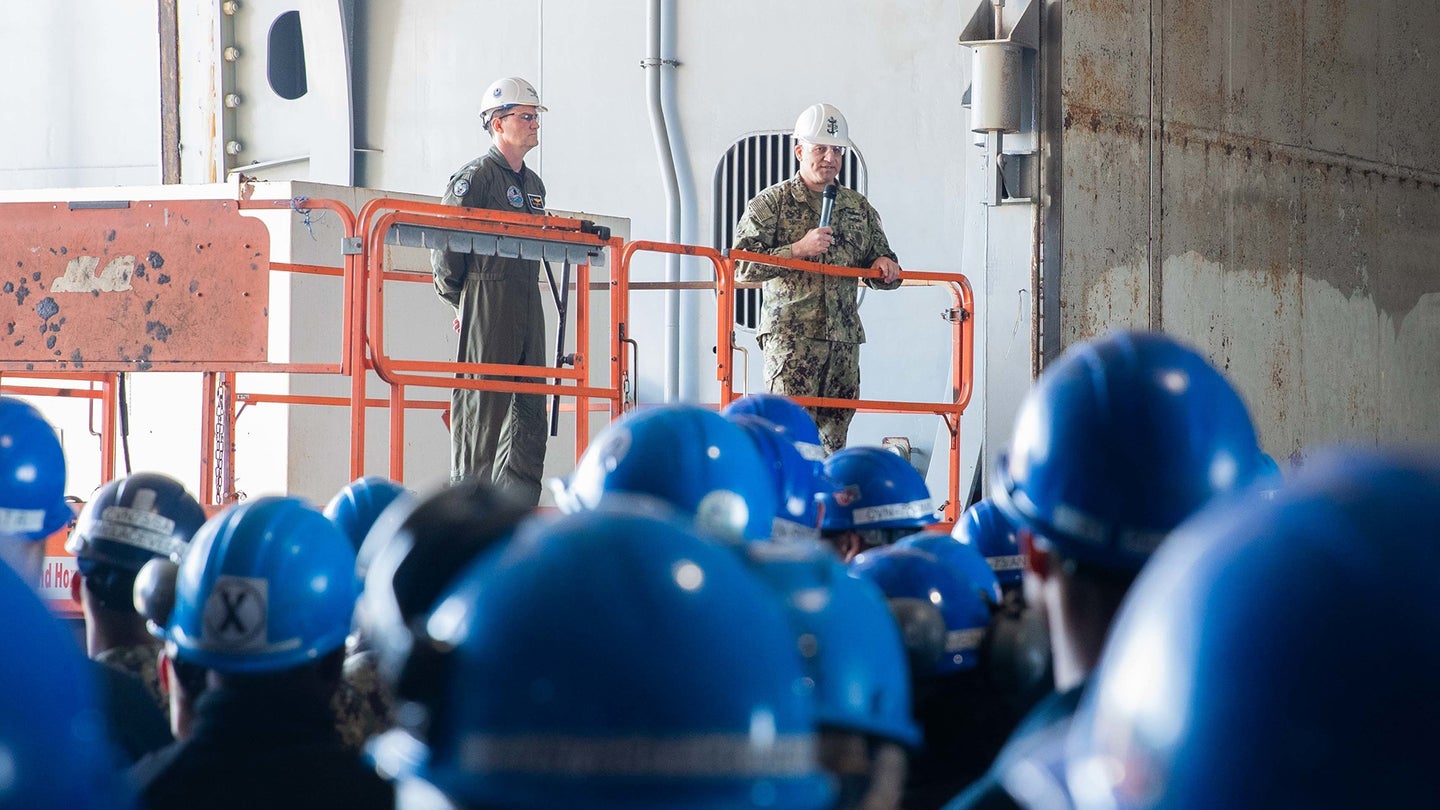 The crew of the aircraft carrier USS George Washington is going through an awful time. At least seven sailors from the ship have died in the past year including one confirmed suicide and three other possible suicide deaths that are under investigation, a Navy official said. The total number of crew members who have died in the past 10 months could be as high as 10, Konstantin Toropin of Military.com first reported.

At any given time, a few hundred sailors out of the ship’s crew of 2,700 are living and working aboard the aircraft carrier, which has been stuck since 2017 in a shipyard at Newport News, Virginia, undergoing a massive refueling and complex overhaul that is running more than a year behind schedule.

Some members of the George Washington’s crew have not had hot water or power in their living spaces for more than two months, a Navy veteran told Task & Purpose. The veteran asked not to be identified to avoid having the Navy retaliate against sailors he knows who are still on active duty.

Yet when Master Chief Petty Officer of the Navy Russell Smith visited the ship on April 22, his message to the George Washington’s crew was that things could always be worse.

“What you’re not doing is sleeping in a foxhole like a Marine might be doing,” Smith told sailors, according to a partial transcript of his comments that was provided to Task & Purpose. “What you are doing is going home at night, most nights, unlike the [deployed aircraft carrier] Harry S Truman. So, when you’re here, some of it is that you have some more stability in that you’re here. The downside is some of the shit that you have to go through logistically will drive you crazy.”

Smith’s remarks were part of his answer to a member of the George Washington’s crew, who had asked him if he and Chief of Naval Operations Adm. Michael Gilday had any plans to make the ship more habitable for sailors aboard during the overhaul.

The sailor said crew members face numerous daily challenges while the George Washington is in the shipyard including a lack of parking, hot water, ship meals, and other examples of “living standards that aren’t necessarily up to par.”

Smith took issue with the sailor’s use of the phrase “up to par,” explaining that it is common for crew members on ships going through an overhaul to have to walk a long way to find working toilets. He added that he’s dealt with such shortcomings throughout his Navy career.

“One of my favorite moments from [aircraft carrier] Lincoln, in drydock, was watching Captain, retired Vice Admiral, Carr walking past me with a towel over his shoulder,” Smith said. “I was like ‘Sir, where are you going?’ He goes, ‘I’m trying to find a working shower, there was no hot water in my head [bathroom].’ And uh, no one is immune to it.”

Smith acknowledged that the crew’s concern about not enough parking was legitimate, but he cautioned that sailors should have “reasonable expectations” about what can be done about it. He also said that it would not be cost-effective to serve food on the George Washington all day instead of during mealtimes.

He added that sailors who serve with the George Washington’s reactor division have access to food overnight, even if it’s not “a gourmet meal.”

Moreover, the food available to the ship’s crew is still better than what is available to special operators and other combat troops, who live in spartan conditions while deployed, he argued.

“No one is telling a Marine that’s out in the field or a SEAL that’s on a boat on a river, ‘Hey, I’m going to get you that hot meal tonight,’” Smith said. “Sometimes, you’re going to have to live through and this is the circumstance in the community in which you serve and in which you live.”

Still, the quality of food aboard U.S. Navy ships has been called into question before. In October 2020, Navy veteran Kevin Selfaison posted pictures on Facebook of rotten and disgusting food that was served on the aircraft carriers USS Nimitz, USS Theodore Roosevelt, and other ships.

It’s also worth noting that the chow halls on large U.S. military bases in both Iraq and Afghanistan consistently served a variety of fresh food including steak and lobsters over the past 20 years — even when the fighting in those countries was at its most violent levels.

As for why sailors need to live aboard the George Washington while it’s still in the shipyard, Smith explained that the Navy cannot simply move the entire crew off the aircraft carrier until all the work is done, “Because you also don’t want to not have this thing manned, if a fire breaks out or something else because we’ve also been through that.”

Only 138 sailors were aboard the amphibious assault ship USS Bonhomme Richard on July 12, 2020, when a fire broke out aboard the vessel that caused damage so extensive that the Navy decided to scrap the ship rather than try to repair it.

Sailors need to be aboard ships even when they are undergoing maintenance, and that means crews have to live in conditions that “are not always great,” Smith said.

“When someone walks by you at Starbucks when you’re in uniform and says ‘thank you for your service,’ this is one of the things that they’re thanking you for, because they know that they can’t or they chose not to do that thing that you are doing,” Smith said. “And without you we don’t have a capital ship, without you, we don’t have national defense.”

After Smith spoke to the George Washington’s crew, some people commented on Reddit that they felt his response was insensitive in light of what the sailors are going through.

Smith issued a statement on Monday night saying that as the Navy’s senior enlisted leader, it is his responsibility to meet with sailors “who may be struggling or are facing personal issues that they need an advocate for.”

“I do this by engaging in open and honest dialogue,” Smith said in the statement. “My heart is with the sailors on the USS George Washington, who are hurting from loss. During my visit to the ship, I wanted to learn about the difficulties our sailors are facing — familiar to me from similar situations during my tours — and to understand their concerns. I heard the crew that day, and far more sailors before and since then; I am in ongoing discussions with our senior Navy leaders to share these concerns, and to ensure they are aware of the issues and their impacts on our sailors.”