If you’re going to do something illegal or unauthorized, here’s a tip: Don’t leave a note. Two sailors aboard the... 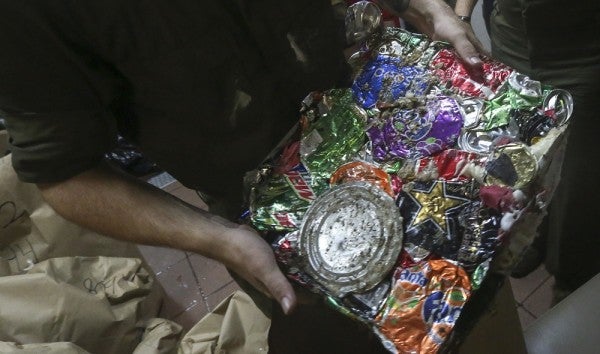 If you’re going to do something illegal or unauthorized, here’s a tip: Don’t leave a note. Two sailors aboard the Navy’s USS Whidbey Island never got the word.

After 20-inch disks of compacted trash began washing up on the shore along North Carolina’s Outer Banks in mid-May, residents of the small seaside towns there were, well, they were pissed.

“The smell was so bad,” one local told The Virginian-Pilot. “They smelled like a dumpster. One was leaking nasty garbage juice.”

Along the Outer Banks, 26 disks were picked up in Carova Beach, according to the Virginian-Pilot, and another 17 were found in Kill Devil Hills, according to the Associated Press. The table-top sized trash disks were then handed over to the Navy, which launched an investigation on May 19.

How did the small beach town residents know the disks belonged to the seagoing service, you ask?

One of the disks had a document with the words “Commander Naval Surface Force” plainly visible on the side, according to Navy Times.

Related: Sailor In Trouble After Filming Herself Refusing To Stand For Colors »

It didn’t take long after that to figure out where the filth frisbees came from. Navy ships use trash compactors to smash plastic into disks, which they typically store on board until they make port, and dispose of the waste on land. Most of the time.

Following the investigation, one Whidbey Island sailor copped to breaking with protocol, telling “Navy investigators that standard procedural steps were skipped, and the trash was instead tossed overboard,” David B. Larter of Navy Times writes. Navy investigators found that another sailor was also involved, according to the Associated Press.

As many as 60 disks are estimated to have been tossed into the sea from the vessel, which is based out of Joint Expeditionary Base Little Creek-Fort Story in Norfolk, Virginia. I just wonder what other random notes and documents are pinned to the sides of the remaining disks. We’ll find out when they wash up on shore.