During a recent chat with a fellow Marine, the Marines United scandal and debate about gender within the Corps inevitably... 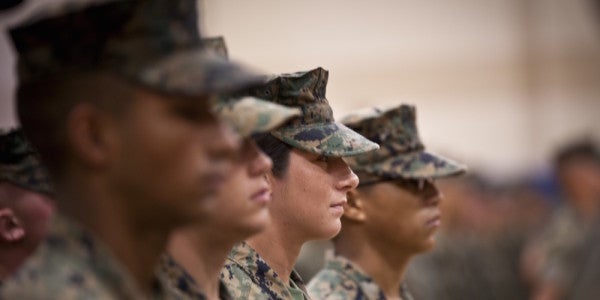 During a recent chat with a fellow Marine, the Marines United scandal and debate about gender within the Corps inevitably came up. We’d been catching up, talking about our families and careers, but the mention of gender brought an eye-roll from our friend.

“I’m so sick of that shit,” he declared. “That has absolutely nothing to do with warfighting.” His response was unsurprising and typical of the Corps we grew up in: bold and assertive, but also ignorant. In truth, gender has a lot to do with warfighting, and approaching warfighting from a gender-relational perspective can greatly enhance both effectiveness and lethality.

Unfortunately, the Marine Corps has been predictably slow to embrace this concept.

Adopting a gender-relational perspective on warfighting is essential to the Marine Corps’ primary mission: winning the nation’s battles. This perspective involves more than just considering the capabilities women do and don’t bring to a fighting organization. Rather, it means developing an understanding of how identity contributes to organizational capacity, capability, process, and narrative, and recognizing that warfighters need a wide range of skills beyond mere physical ability.

The multi-dimensional and increasingly complex future operating environment demands a diverse skillset. By limiting our image of the ideal warfighter to the type of person who excels in the stereotypical physical domain — think square-jawed and muscle bound — while conflating “gender” with efforts to meet quotas, we overlook the force-multiplying potential of the gender-relational perspective.

The Marines of the future must possess critical thinking ability, technical expertise, mental and physical endurance, maturity, and resilience — capabilities found in men and women alike. Understanding the dynamics of gender will allow the Marine Corps to identify how to develop these skills, increasing organizational efficiency, enhancing talent management, and building organizational adaptability and flexibility.

By lifting the veil around gender stereotypes, developing a gender-relational perspective will also help the Corps locate talent in unexpected places. “Man” and “woman” are not monolithic categories; even with respect to purely physical abilities, the bell curves overlap considerably. We have all known Marines who deviate from stereotypical gender roles. By basing opportunities to serve on capabilities that are typically associated with men, specifically the ability to do pull-ups, and valuing those capabilities above all else when choosing warfighters, we neglect the wide range of skills that any capable human possesses such as intellect, critical thinking skills, and social and emotional intelligence. The future battlefield will demand these kinds of skills from its leaders. A gender relational perspective can help the Corps eliminate this limitation to become a more flexible, effective, and adaptive institution that fully embraces the most valuable skills in the available talent pool.

Ultimately, this isn’t just about women, it’s about capabilities and an institution’s capacity to effectively deploy employ them. Women provide access to the female perspective inaccessible to all-male units, particularly in conflict zones where cultural norms often prevent contact with civilian by male Marines. The unique societal pressures and expectations experienced by women provide unique perspectives that allow the bridging of cultural barriers and building of trust among local populations that expand a unit’s skillset, a phenomenon cultural support teams experienced in Afghanistan. Warfighting organizations must seek every available advantage, so incorporating diverse perspectives, that meet the requirements of the complex modern battlefield, is critical.

Optics matter too. The gender composition of the Marine Corps should reflect American values to the international community. If we consider concepts like equal opportunity and human rights to be key democratic principles, then the Marine Corps should be representative these values. If not, we face the prospect of the force increasingly diverging from contemporary America: Today’s Corps is 8% female, and that percentage drops precipitously among middle and higher ranks. This kind of rift would limit the Corps’ ability to recruit and retain intelligent men and women representative of the nation they pledge to defend. Failing to project those principles overseas during joint military operations and exercises leaves the Corps looking either negligent or hypocritical.

Despite commonly held beliefs, homogenous units are far less prepared for the challenges of the future. Because Marine Corps assessments predict that future conflicts will require a greater range of unconventional, non-traditional warfighting skills, drawing from only half the population means commanders are less likely to wind up with the highly qualified Marines they need. Moreover, decision-making and leadership — skills that rely on maximizing experience — would also suffer in an all-male force.

Facing an increasingly complex international environment, the Marine Corps must embrace every opportunity to diversify its ranks. Adopting a gender-relational perspective makes an institution more effective, flexible, and creative, and therefore, more lethal. If the Marine Corps wants to remain an exemplary fighting force — one able to seize every advantage in future conflicts — it must embrace gender diversity within its ranks.