U.S. Army and Marine Corps troops downrange carry a hell of a lot of stuff. According to a new Government... 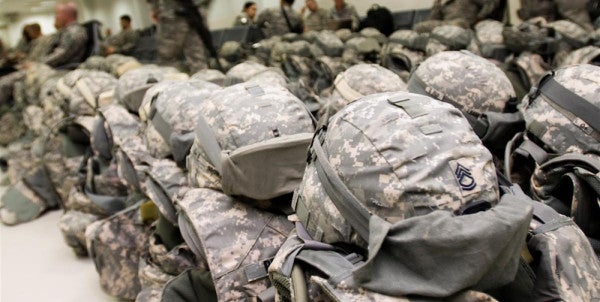 U.S. Army and Marine Corps troops downrange carry a hell of a lot of stuff. According to a new Government Accountability Office report on the branch efforts to improve personal protective equipment, or PPE, Marines fighting in Iraq or Afghanistan in 2016 humped an average 117-pound load. For the Army, it was 119 pounds, and that figure will likely increase for personnel deployed to Afghanistan in 2017.

This, the GAO report notes, is generally bad news: The 1990 Army Field Manual 21-18 insists that fighting loads should not exceed 48 pounds and approach march loads not exceed 72 pounds. Weighing down troops with excessive loads risks “negative effects on personnel mobility, lead to earlier fatigue onset, and exacerbate the risk associated with high-temperature operational environments,” all things you generally don’t want when you’re risking a three-hour firefight with the Taliban.

Luckily, there’s a clear solution: not just lighter body armor, but better, too. The Army and Marine Corps want to reduce the weight of existing protective systems by 40 to 50%, or six to seven pounds, and according to the report.

Primary personal protective equipment and approximate weight specifications based on U.S. Army and Marine Corps data from 2016.Photo via GAO/DoD

In April 2017, PEO Soldier announced that the Army could see a replacement body armor system as soon as 2018, including a new tactical vest and a futuristic, motorcycle-style helmet. The new torso and extremity protection system (or TEP), isn’t just five pounds lighter, but designed for operational flexibility with a scalable vest, ballistic combat shirt, pelvic protection system, and battle belt.

While the TEP could see action downrange as early as 2018, troops will have to wait a little longer for new headwear. The lightweight Integrated Head Protection System features a “mandible” jaw protector, visor, and “ballistic applique” that serves as a protective layer. Not bad considering the Army just authorized light-to-dark reactive sunglasses on top of that.

The Integrated Head Protection System will make its debut in 2020.Photo via DoD

In the meantime, the Army’s working on another, more immediate option for tactical headgear. The polyethylene Advanced Combat Helmet Generation II will, if PEO Soldier gets its way, weigh 24% less than the existing 15-year-old Kevlar model. Although this difference actually comes out to just a pound of difference between the two models , but that small bit of extra mobility could make all the difference during an ambush by ISIS thugs outside of Mosul.

Of course, there other options for reducing troop loads: “precise and on-demand resupply,” namely through aerial delivery systems like the Joint Precision Airdrop System implemented in recent years, or the Army’s prototypeunmanned dual-rotor DP-14 Hawk could help rapidly and efficiently deliver food and water, arms and ammunition to troops deployed in hard-to-reach spots.

But until the Pentagon engineers the ultimate take-out service for warfighters downrange, we’ll take the future of personal body armor anyway. And if the GAO report is any strong signal to lawmakers in Washington, D.C., it’s that there’s no price tag too high when it comes to giving troops downrange the next-generation combat armor they deserve.