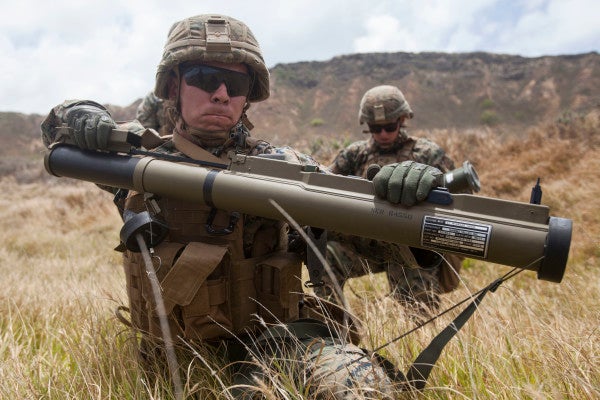 The Marine Corps is working to procure and field a next-generation anti-tank rocket launcher system that significantly reduces backblast within the next several years, the service announced on Monday.

Unveiled in June 2018, Nammo's new 13-pound FFE system is characterized as a “compact, lightweight, single-shot weapon system” that incorporates an “improved” launcher with an enhanced in-line trigger mechanism and improved sling design, according to MARCORSYSCOM.

The upgrade doesn't just just offer a suite of adjustments to the M72 fire control system, but purportedly all-but eliminate backblast, the heat and overpressure created by each round that can limit the use of anti-tank weapons in combat.

According to MARCORSYSCOM, the new M72 system “enables Marines to fire several shots per day from inside a room,” a tremendous boon for marines operating from, say, a secure bunker downrange.

When firing at night, the upgraded M72's muzzle flash and back blast “is less than that of an M9 pistol,” per MARCORSYSCOM.

As Task & Purpose previously observed, less backblast and a reduced noise and visual signature will allow troops to unleash on light armored vehicles from fortified, enclosed positions, ostensibly offering an increase in lethality with less risk of opening troops up to enemy fire.

“The new LAW FFE is a true Fire-from-an-Enclosure capability unlike anything the Marine Corps has ever seen,” Warren Clare, the program manager for Ammunition at MARCORSYSCOM, said in a statement. “It will become a force multiplier.”

Grunts appear to agree. In 2018, troops with the 3rd Battalion, 4th Marine Regiment got a chance to test out the new rockets during the Urban-ANTX 18 urban warfare exercise and deemed the new rounds “a game changer,” as Lance Cpl. Sam Elichalt told Defense News at the time.

First adopted by the Army and Marine Corps at the height of the Vietnam War, the M72 has remained a staple of infantry arsenals for over a half-century.

The new FFE comes in two configurations, according to MARCORSYSCOM: an M72A8 anti-armor warhead and the M72A10 multi-purpose, anti-structure munition that gives Marines the added capability of leveling small buildings.

The M72A10 incorporates an advanced warhead design with a multipurpose explosive and a self-discriminating fuse that operates in either fast- or delay-mode based on target construction,” Richard Dooley, a project officer for Maneuver Ammunition and Missile Programs with MCSC’s PM Ammo, said in a statement.

“These advancements enable Marines to engage various targets, such as structures, bunkers and enemy personnel.”

It's unclear how much the upgrade will cost: funding for a M72 LAW upgrade does not appear in the service's fiscal year 2021 budget request.

The service hopes to begin fielding of the new system starting in fiscal year 2022, according to MARCORSYSCOM.