How The US Military Became A Tank-Killing Machine

In the 1970s, the United States produced what might be considered one of the worst anti-tank guided missiles (ATGM) of... 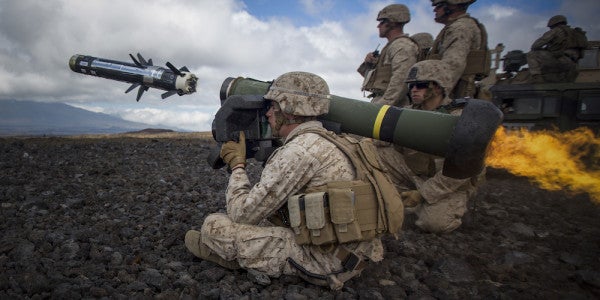 In the 1970s, the United States produced what might be considered one of the worst anti-tank guided missiles (ATGM) of all time. The M47 Dragon was slow, quirky and took forever to reach its target.

Infantry anti-tank weapons were a relatively weak area of the U.S. military throughout most of the Cold War. While the BGM-71 TOW was an excellent vehicle-mounted ATGM for its time, it was not readily infantry-mobile. The tripod, launch unit, and sight for the TOW weigh in at more than 200 pounds.

Lighter anti-tank duties fell to the M72 Light Anti-Tank Weapon rocket launcher, M47 Dragon light ATGM and the M67 90mm recoilless rifle. The M47 Dragon began to replace the M67 after its adoption in 1975, but the M67 stuck around in specialized roles.

But what made the M47 Dragon bad?

The primary reason is the Dragon’s propulsion system. Instead of a simple arrangement of a continuous burn rocket motor and fins, the M67 Dragon featured many rings of tiny rocket engines which “popped” off in short bursts to adjust the missile’s flight path.

This lead to a myriad of downsides. The missile’s guidance was erratic, with the missile jumping around in flight as the bursts fired off.

The bursts were loud and distinctive—they would warn a target that a Dragon had been fired and was closing on them.

Finally, in certain environmental conditions, the bursts could leave a trail of smoke puffs , which could give away the position of the gunner.

The burst-engine method didn’t even make the missile fast. In fact, it was slower than most of its counterparts, taking over eleven seconds to reach its effective range of 1 kilometer out.

Guidance itself was accomplished by tracking an infrared flare on the rear of the missile, similar to the TOW. This meant that the Dragon could be defeated by the Soviet and Russian Shtora active protection system.

The Dragon was usable at night, but doing so required an additional night-sight that needed even more equipment. Canisters of freon were used to cool the night sight’s sensors, but this only was effective for two hours.

The United States would upgrade the M47 Dragon into the Dragon II and Super Dragon, which boosted the range and penetrating power of the missile. But these upgrades didn’t solve the primary flaw of the Dragon, the propulsion system.

By the 1980s, the United States was looking into replacing the Dragon. The program was initially called the Advanced Anti-Tank Weapon System–Medium. (AAWS-M)

After a competitive process that ruled out a laser-beam riding missile and a fiber-optic link missile (similar to the Israeli Spike), the Texas Instruments entry won the contract and began developing the Javelin.

Practically every aspect of the Javelin builds upon a flaw of the M47 Dragon.

Gone is the old night sight that required bottles of coolant. A self-cooling day/night thermal sight with multiple modes of zoom is a key part of the Javelin, the Command Launch Unit.

The missile itself has a thermal seeker as well, as opposed to being simply controlled by the firing post. This makes it significantly more resistant to Shtora-style active protection systems.

The long delay between missile launch and impact for the Dragon was likely a large factor that led to the selection of the Javelin for AAWS-M. The Javelin is a fire-and-forget missile, which means that the gunner can immediately move after firing, cutting out the missile flight time factor almost completely with regards to the crew repositioning.

The top-attack trajectory and conventional rocket engine greatly reduce the chances that an enemy tank will see or hear a Javelin launch, compared to a Dragon launch.

Overall, the Javelin was better than the Dragon in practically every way. In contrast to the Dragon, which was only exported to a handful of countries, the Javelin has been a major success worldwide (despite its cost) with major sales to the UK, France, and Australia.