The Army just got its hands on a robot .50 cal to play with 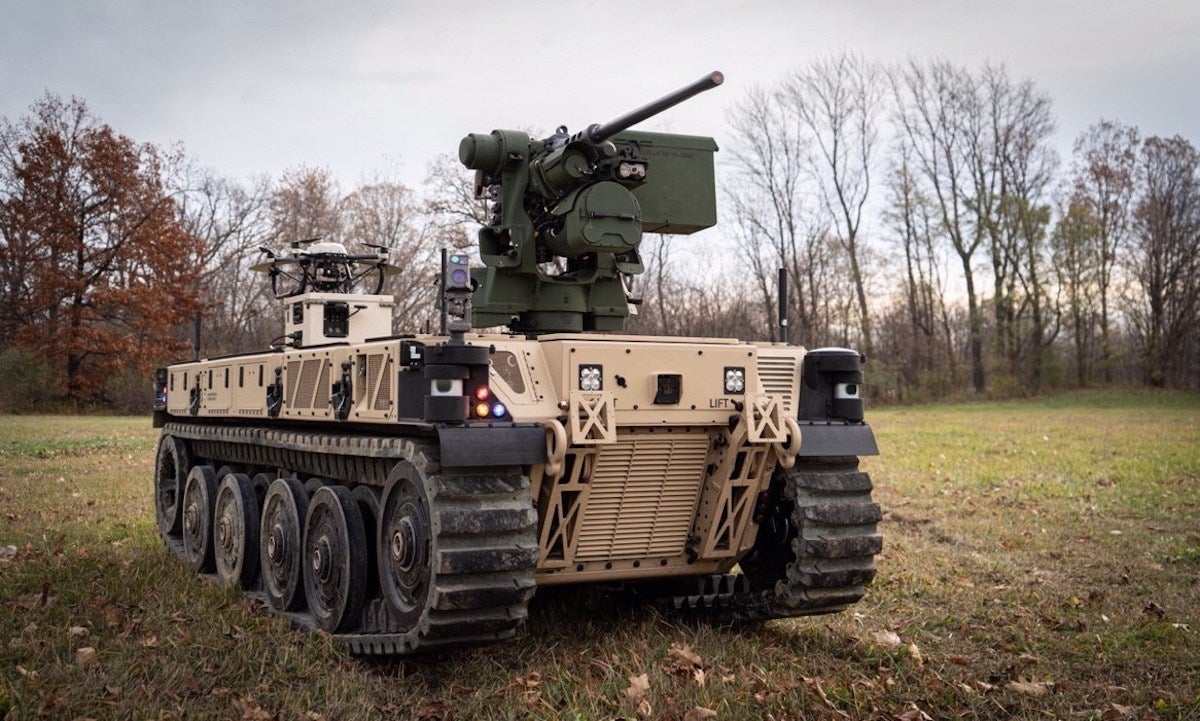 The age of weaponized robots storming the battlefield alongside humans soldiers is officially upon us.

The Army accepted delivery of its very first Robotic Combat Vehicle-Light (RCV-L) from QinetiQ Inc. and Pratt Miller Defense in early November, the companies announced in a statement last week, the first of the four systems the service plans on testing in the coming months

Indeed, photos released of the new RCV-L show the vehicle base outfitted with what appears to be a .50 caliber machine gun mounted on a legacy M153 Common Remotely Operated Weapon Station (CROWS-J) turret developed by Kongsberg.

Selected in July to provide wireless fire control capability to the RCV-L, Kongsberg’s turret could eventually boast a Javelin anti-tank guided missile alongside the system’s existing machine gun to help the unmanned vehicle deal with armored vehicles, according to an Army slide published by Breaking Defense.

The final iteration of the RCV-L will eventually weigh “less than 10 tons, with a single vehicle capable of being transported by rotary-wing assets” like the Army’s CH-47 helicopter, according to a 2019 Congressional Research Service report on the Army’s RCV effort.

According to Breaking Defense, the RCV-L also comes equipped with  the HoverFly Tethered Unmanned Aerial System, a physically-connected drone system designed to “look over buildings, hills, and obstacles while the ground vehicle stays hidden.”

The current prototype RCV-Ls will be used to “determine the feasibility of integrating unmanned vehicles into ground combat operations,” according to an Army statement at the time, with the systems “used to conduct a company-level experiment at the end of 2021.”

“The delivery of the first RCV-L is an exciting result of numerous government organizations and industry working together to achieve our first combat-ready robotic vehicle,” Michael Rose, branch chief at the Army’s Combat Capabilities Development Command (CCDC) Ground Vehicle Systems Center (GVSC) said in a statement.

QinetiQ and Pratt Miller were selected to develop the RCV-L platform through a rapid contracting mechanism back in February, as Defense News previously reported.

“Robots have the potential to revolutionize the way we conduct ground combat operations,” Brig. Gen. Ross Coffman, director of the Next Generation Combat Vehicle Cross-Functional Team, said in the statement at the time.

“Whether that’s giving increased firepower to a dismounted patrol, breaching an enemy fighting position, or providing [chemical, biological, radiological, nuclear and explosive] reconnaissance, we envision these vehicles providing commanders more time and space for decisions and reducing risk to soldiers.”

Related: The Army just wrapped up its first robot combat vehicle experiment. Here’s what it learned