What you'd get if WALL-E went to war. 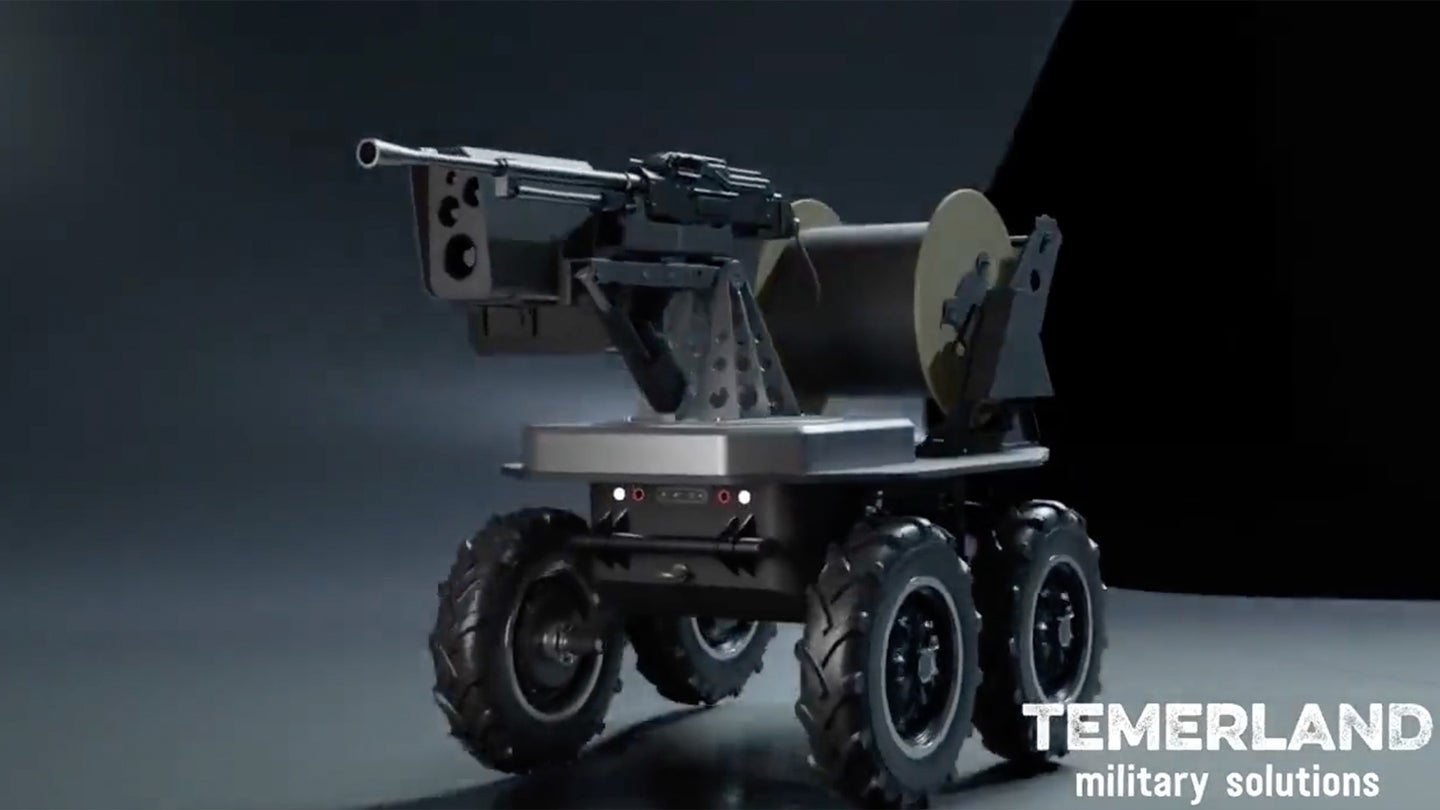 The invasion of Ukraine has been described as the first “TikTok war,” with countless videos and photos posted to social media showing destroyed Russian tanks, which are promptly memed, and lately even the tradition writing notes on outgoing ordnance has gotten a 21st century reboot. Now, Russia’s war with Ukraine might be one of the first tests for the concept of Terminator-esque robots, marching off to war. Or in this case, rolling into combat:

Temerland, a Ukrainian robotics company, says it will deploy GNOM robotic vehicles equipped with 7.62 mm machine guns to the front lines near the city of Zaporіzhzhia.

According to a statement from Temerland, the GNOM is a fairly small robot, about 50 kilograms, or 110 pounds, and two feet long and a little less than two feet wide. A box on wheels, if you will. The GNOM can be adapted for multiple tasks, including surveillance, transporting equipment, or, in this case, as a mobile fire-support platform. Here’s a test video from last year.

Chief among those concerns is how a remote vehicle is integrated into formations. On top of that, it still requires a human pilot, and thus, it could result in a drain on manpower. And seeing as the technology is still so new, there are unanswered questions about it’s viability, and that of ground combat drones in general.

“The function of a UGV [unmanned ground vehicle] is ultimately to replace a human fighter,” said Bendett. “But humans can communicate. They can adapt. They can form units and attack.”

Robots aren’t quite there yet, though that’s certainly the goal. As Bendett added, “The ultimate usage is fully autonomous usage, but we are many years away from that. But this is part of advertising capabilities, part of the evolution of UGVs.”

Unmanned aerial vehicles have become a mainstay of modern warfare, from airframes piloted from hundreds of miles away to something like the Switchblade, which is launched like a mortar round and is essentially a tiny drone with explosives attached.

Unmanned ground vehicles pose a different challenge, though, especially in the context of the intense and complicated warfare in Ukraine.

“When it comes to UGVs, Russia has actually been a pioneer,” said Bendett.

Dating back to the 1930s, Russia has experimented with robotic tanks, although their actual effectiveness has always been suspect. In 2018, the Russian military claimed it had deployed Ural-9 robotic tanks to Syria, although it was later reported that a senior researcher at a conference at the Kuznetsov Naval Academy in St. Petersburg said that “modern Russian combat Unmanned Ground Vehicles (UGVs) are not able to perform the assigned tasks in the classical types of combat operations.”

They have been seen in limited numbers in this conflict, though. The Uran-6, a remotely piloted tracked robot used for demining operations that was also previously deployed to Syria, was shown in action outside of the Ukrainian city of Mariupol. This was far behind the front lines of the conflict, though, in a relatively controlled environment.

So, a machine gun on a robot is in and of itself, a fairly simple concept. In Iraq, it was something that two brothers built from scratch. Actually employing it effectively in combat, however, has yet to be demonstrated.

“It’s easier to send out a robotic vehicle with a machine gun,” said Bendett. “But is it actually more effective?”