"The days of the carrier on the modern battlefield may be numbered.” 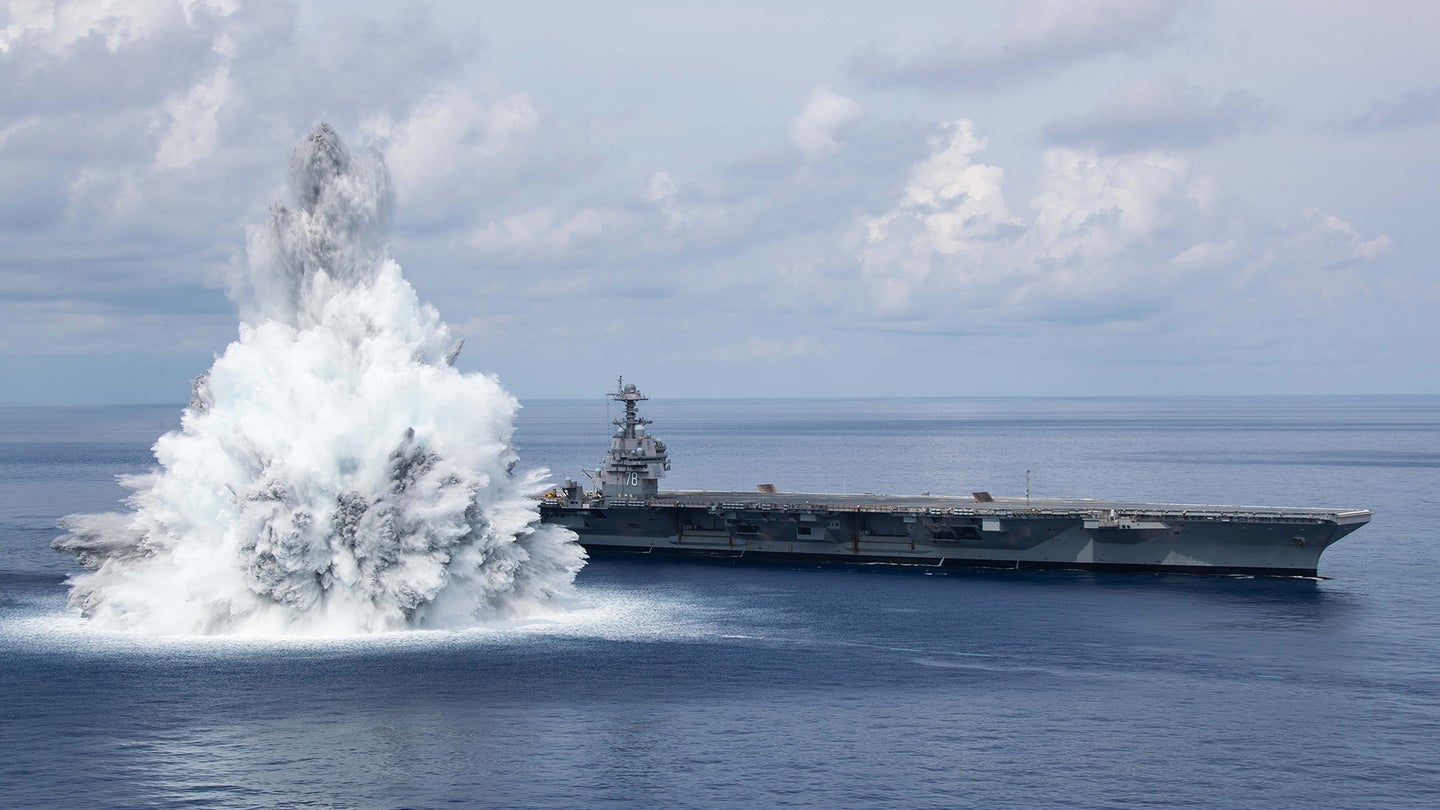 Aircraft carriers such as the $13 billion USS Gerald R. Ford are floating symbols of the United States’ military power. They are built to dissuade adversaries from attacking American interests, reassure allies in times of crisis, and provide lifesaving close air support to U.S. troops in combat.

Yet these capital ships are also large and tempting targets for anti-ship missiles. Now China, which has missiles that can strike ships up to 2,500 miles away, has reportedly found a way to track U.S. aircraft carriers in real-time.

Task & Purpose has not independently verified the claim made by Chinese space scientists that they had spotted the Harry S. Truman. The Navy referred questions about the possible implications of this claim to the Pentagon, which did not provide a comment for this story.

If this reporting is accurate, it could indicate the Navy would be unable to dispatch aircraft carriers to Taiwan in response to a Chinese invasion, said Timothy Heath, a senior international defense researcher at the RAND Corporation, a nonprofit research organization.

“Given China’s long-range anti-ship ballistic missiles, the only hope that a U.S. carrier has for surviving a battle near Taiwan is to hide from Chinese sensors,” Heath told Task & Purpose. “If this report is true, then the carriers’ last defense against anti-ship ballistic missiles is now gone. The carrier can be found, identified, and tracked, and that data undoubtedly can be passed to Chinese targeteers who could then target the warship.”

In the past, Chinese analysts have had to pore over a massive number of satellite images to locate U.S. aircraft carriers, Heath said. By using artificial intelligence, the Chinese military could greatly accelerate that process.

Even if this particular story about how China tracked the Harry S. Truman turns out not to be true, military analysts have long expected that artificial intelligence would make it much easier for China and other adversaries to sift through satellite images and identify targets, he said.

“I think there is an understanding that the future battlefield is going to be highly transparent in the sense that the proliferation of satellites and AI [artificial intelligence] will make it increasingly difficult for major combatant ships like a carrier to hide. In fact, it’s almost a given that the days of the carrier on the modern battlefield may be numbered.”

China already has a variety of ground-based radars, airborne sensors, and satellites that have made U.S. military planners apprehensive about sending aircraft carriers anywhere near Taiwan, Heath said.

“The military officers I’ve talked to said they have been planning for years to deploy carriers so far away from Taiwan that they’re out of range of the [Chinese] missiles, but frankly, also irrelevant to the combat,” Heath said. “The bottom line is if the U.S. is relying on carriers to save Taiwan, that’s a lost cause. It’s just not viable.”

Retired Navy. Capt. Jerry Hendrix said he has been worried about how U.S. aircraft carriers can be detected from space. Hendrix is a Navy expert who spent 26 years on active duty, during which he served on aircraft carriers and as a strategist on the Chief of Naval Operations staff.

Hendrix recounted to Task & Purpose how he read a news story years ago about an astronaut who spotted his former carrier while he was serving on a space station. From far above the Earth, the astronaut was still able to see the ship’s hull number through one of the station’s telescopes.

“It occurred to me that if a human astronaut in the space station was able to do this, that it probably is not that hard to look for aircraft carriers,” Hendrix said.

Indeed, there are not that many ships in the world that are as large, as fast, or that displace as much water as U.S. aircraft carriers, so Chinese satellites have plenty of clues to look for, Hendrix said. Even though super tankers are larger than aircraft carriers, they do not turn into the wind to launch aircraft.

“If you’re programming in through AI-specific attributes of an aircraft carrier that an aircraft carrier would do but a merchant ship of a similar size would not, then you’re able to make that detection from overhead imagery more quickly,” Hendrix said.

To keep aircraft carriers relevant in future wars, the Navy needs to invest in carrier-based aircraft that can fly much further without refueling than F-35C Joint Strike Fighters, Hendrix said.

Hendrix said he estimates the F-35C can fly up to 650 nautical miles before it needs to be refueled. While the Navy is developing the MQ-25 drone to refuel carrier-based aircraft, not enough of those drones will be on individual aircraft carriers to refuel a lot of F-35Cs for a large strike, he said.

The Navy really needs an unmanned combat aircraft, Hendrix said. The service had been developing such a drone, the X-47B, but decided to move forward with the MQ-25 program first.

There’s no doubt that threats against aircraft carriers are growing, but it’s also worth noting that experts have been writing the aircraft carrier’s obituary for a century. Indeed, the U.S. Naval Institute has compiled a list of articles from its “Proceedings” magazine going back to 1922 that debate the carrier’s worth.

One naysayer argued in 1925 that the Navy should use large dirigibles instead of ships to carry aircraft because airships can fly over both sea and land. A 1959 commentary questioned whether the Navy would get better use out of its money if it built more submarines instead of carrier strike groups. And one author wrote in 1999 that the cruise missile attacks on Al Qaeda in Sudan and Afghanistan the previous year marked the beginning of the end for aircraft carriers.

“As we enter the new millennium it will become more and more obvious, however, that technology that earlier favored the aircraft carrier will dictate its demise,” wrote the author, whose name was not included in the USNI list.

Retired Navy Capt. Brent Sadler said he does not believe the U.S. Navy’s aircraft carriers are so vulnerable to detection that they could not take part in a military response to a Chinese invasion of Taiwan.

“These Chinese kill chains are long and carrier strike groups are hard targets,” said Sadler, the senior fellow for naval warfare and advanced technology at the conservative Heritage Foundation think tank in Washington, D.C. “They can and will operate within threat ranges.”

In other words: Just because Chinese satellites detect U.S. aircraft carriers does not mean that the Chinese military can get the ships’ location in time to successfully hit them with missiles.

In 1981, the U.S. Navy exercise Ocean Venture demonstrated that American aircraft carriers could avoid being detected by Soviet satellites, thus disproving that the carriers had to stay far away from Soviet territory to survive, said Sadler,  the senior fellow for naval warfare and advanced technology at the conservative Heritage Foundation think tank in Washington, D.C.

“Same is true today, but we just have not really demonstrated this in a way like Ocean Venture did,” Sadler told Task & Purpose.

With that said, the U.S. military has a lot of work in preparation for a possible war with China triggered by an invasion of Taiwan, Salder said That includes practicing how it would fight such a war, expanding the defense industrial base, and investing in more ships to be able to wage a long war.

“Bottom line – carrier strike groups, long-range aircraft and submarines will all be active if such a war occurs,” Sadler said.