The Pentagon simply can't move personnel and supplies to where they need to go like they used to, according to a new assessment of the U.S. military logistics apparatus 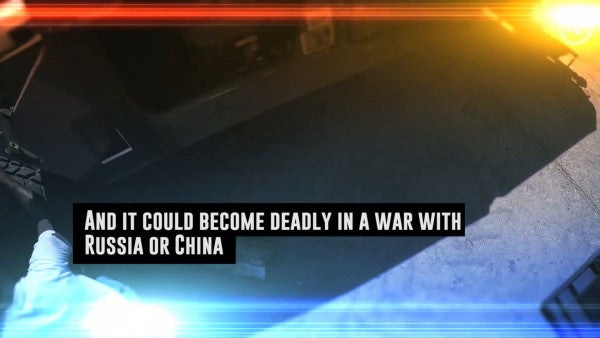 After nearly two decades of playing Whack-A-Mole with militant groups across the Middle East and North Africa, the U.S. military appears woefully unprepared for the return of so-called “great power competition” with Russia and China for one simple reason, according to a new assessment: the Pentagon simply can't move personnel and supplies to where they need to go like they used to.

According to a new report from the Pentagon's Defense Science Board — based on a year-long survey of active-duty and retired logistics experts that was first made public in November — the tried-and-true U.S. military logistics apparatus has atrophied since the end of the Cold War.

This leaves the Pentagon effectively incapable of efficiently mustering the necessary troops and supplies at airfields and seaports for overseas deployments as the DoD reorients its strategic focus on adversarial nation-states like Russia and China compared to networked enemies like al Qaeda and ISIS.

“Since the end of the Cold War, the United States has not fought an adversary capable of the catastrophic disruption of military supply chains and deployment of personnel and materiel,” the report, authored by the DSB Task Force on Survivable Logistics that's chaired by retired Army Gen. Paul Kern and retired Air Force Gen. Duncan McNabb.

“As a result, the [Joint Logistics Enterprise] has suffered neglect and chronic underfunding relative to other DoD priorities.”

Military Sealift Command ships sail in formation off the coast of Guam during an exercise with Helicopter Sea Combat Squadron 25 (HSC-25), August 23, 2018. HSC 25 is the Navy's only forward deployed MH-60S expeditionary squadron

While a November assessment of the Trump administration's 2018 National Defense Strategy previously indicated that the U.S. would almost certainly endure a “decisive military defeat” in a conventional conflict with Russia or China, the DSB report explicitly details how years of cushy logistics operations have lulled the Pentagon into a false sense of security at the cost of readiness and U.S. power projection.

Here's the money graf, which focuses on shoring up the strategic mobility triad (emphasis added):

The mobility triad, which includes sealift, airlift, and prepositioned assets, is plagued by readiness issues and shortages that must be addressed in order for the United States to defeat a strategic competitor.

The commercial sealift fleet that assists military logistics has been shrinking for decades and, left to current plans, the organic (i.e., government-owned) fleet will decrease 50 percent by 2033.

The Civil Reserve Airlift Fleet (CRAF) is a key component of the JLEnt, and the DoD relies on it as the primary means of delivering passengers and bulk air cargo.

However, the importance of both airlift and sealift are not properly wargamed to determine the impact of highly likely adversary intervention. Accounting for attrition, A2AD threats, and risks to commercial civilian airmen and mariners requires wargaming and solutions.

This commercial sealift fleet in particular has fallen apart in recent years. As Defense News reported in October 2018, the Pentagon only has some 46 vessels on standby as part of its Ready Reserve Force, all of which are “old and rapidly approaching the end of their hull life,” and some 60 U.S.-flagged Merchant Marine ships under the Maritime Security Program ready to kick into action in the event of a crisis.

The Merchant Marines, a critical auxiliary to the U.S. Navy during World War II, isn't doing so hot either: According to a May 2018 report from McClatchy, the fleet has declined from 1,288 international trading vessels in 1951 to just 81 today.

The problem posed by an aging and shrinking fleet is simple: Aging hulls means more mission-limiting equipment failures, which means fewer vessels in rotation, which means more failures, and so on and so forth. According to an August 2017 Government Accountability Office report on the Navy's surge sealift and combat logistics fleets, readiness has only trended downward since 2012 — a trend that can only be reversed through significant investment.

“The average age of the ships in the surge sealift fleet is nearly 40 years, and the number of surge sealift ships reaching the end of their programmed service lives over the next 10 years will reduce sealift capacity by over 25 percent,” according to the GAO report. The Navy has not finalized these plans, and officials acknowledged that these efforts do not fully incorporate leading practices for capital investment planning”

This will all prove disastrous during a conventional conflict, a risk that the Army warned last year would prove “unacceptable.”

“Without proactive recapitalization of the Organic Surge Sealift Fleet, the Army will face unacceptable risk in force projection capability beginning in 2024,” the Army's G-4 logistics organ warned the House Armed Services Committee in a February 2018 memo obtained by Defense News. “By 2034, 70% of the organic fleet will be over 60 years old — well past its economic useful life; further degrading the Army's ability to deploy forces.”

Depressingly, sealift shortfalls aren't the only major risk facing the Pentagon's logistics apparatus — it's the rise of cyberwarfare that will add another complicated dimension to military supply chains.

“Military and commercial networks are susceptible to espionage, manipulation, and attack by adversaries,” the report states. “Logistics data is neither as accessible nor used as efficiently as it should be. Technological solutions to these problems already exist, or will exist in the near future. The DoD must adopt them quickly.”

Navy Capt. Kevin Stephen, a spokesman for U.S. Transportation Command, did not dispute the report's findings in a statement to the Washington Free Beacon.

“We are continually assessing and improving DoD's ability to project power globally, which remains our nation's comparative advantage, providing multiple options to our national leadership and multiple dilemmas to potential adversaries,” he said.

Read the full Defense Science Board report below:

SEE ALSO: The U.S. Military Would Suffer A 'Decisive' Defeat In A War With Russia Or China, New Report Says

WATCH NEXT: What If Russia Went To War With China?