The USS Gerald R. Ford has come a long way in shaking off its technical woes in recent years, but the Navy's $13 billion supercarrier is still facing a major challenge: it's unprepared to actually defend itself in combat 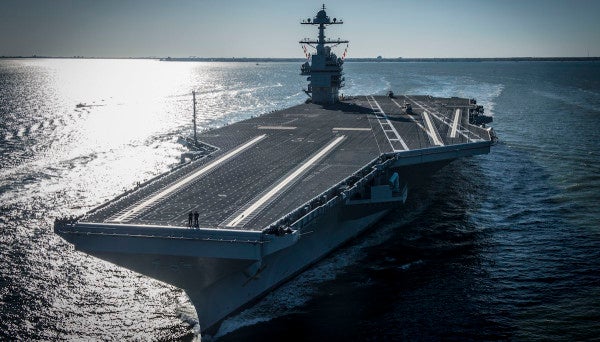 The USS Gerald R. Ford has come a long way in shaking off its technical woes in recent years, but the Navy's $13 billion supercarrier is still facing a major challenge: it's still woefully unprepared to defend itself in combat, according to the Pentagon's testing and evaluation arm.

Recent testing of the Ford's systems on a specially-designed Self-Defense Test Ship (SDTS) in fiscal year 2019 revealed “combat system deficiencies and limitations” associated with the new carrier's electronic warfare system, multi-function radar (MFR), and ship-to-ship communications equipment, according to a new report published by the Pentagon's director of operational testing and evaluation.

In particular, the Ford's SLQ-32(V)6 electronic surveillance system demonstrated “poor performance” so dismal that the Navy delayed additional operational testing on the system until the underlying problems could be addressed.

In addition, the Ford's SPY-3 multi-function radar and Cooperative Engagement Capability (CEC) ship-to-ship comms “failed to maintain detections and tracks for one of the threat surrogates in multi-target raid,” even though the Pentagon acknowledged that the scenario “was more challenging to the combat system than originally planned.”

These aren't the only problems facing the Ford in terms of survivability in a combat situation. According to the OT&E assessment, the potential vulnerability of the Ford's critical systems to “underwater threat-induced shock” hasn't been fully tested due to the scarcity of the systems.

“USS Gerald R. Ford (CVN 78) continues to progress in a series of rigorous test events to demonstrate the effectiveness of the ship's combat system in self-defense,” Couch said, noting that the vessel “has the most technologically-advanced, proven and capable self-defense combat system ever fielded on a U.S. Navy warship.”

“Compared to Nimitz-class ships, USS Gerald R. Ford is equipped with significant updates to its integrated combat system, to include two new phased-array radars, a significant update to the proven and deployed electronic warfare system, and the replacement of track illuminator directors with the SPY-3 multi-function radar controlling RIM-162 Evolved Sea Sparrow missiles in an engagement,” Couch said.

But taken together, all of the deficiencies that cropped up during developmental testing “reduce the overall self-defense capability” of the Ford, according to the OT&E assessment.

To make matters worse, the Navy has only conducted one of four planned SDTS operational testing events and “has not resourced the remaining testing,” meaning that the service likely doesn't plan on further evaluating the system despite these deficiencies.

The reason for the lack of comprehensive evaluations for these critical systems? “Schedule constraints, lack of funding, and insufficient planned developmental testing,” according to the Congressional Research Service — all of which could lead to the Navy potentially deploying an untested warship without fully knowing what it can and cannot do.

“If the Navy does not conduct all the remaining events, testing will not be adequate to assess the operational effectiveness of the [Ford's] combat system,” according to the OT&E assessment.

Luckily, the Navy plans on continuing to conduct additional testing of the Ford's self-defense systems with plans on competing final evaluations by 2023, Couch told Task & Purpose.

“To date, the Navy has conducted more test events on USS Gerald R. Ford than on any previous aircraft carrier,” Couch said. “The Navy plans to execute additional developmental and operational tests on CVN 78 over the next 15 months as the ship prepares for Combat System Ship Qualification Trials in 2021.”

The new deficiencies with the Ford's self-defense systems are just the latest in a long string of issues facing the carrier, which spent several extra months in dry dock this year as sailors worked to correct unforeseen issues with the ship's nuclear power plant and weapons elevators.

The deficiencies will likely do little to assuage concerns over the cost and growing vulnerability of the Navy's aircraft carriers against advanced new missiles that lawmakers detailed during Chief of Naval Operations Adm. Michael Gilday's confirmation hearing in August.

“I don't want indefensible, $12 billion sitting ducks out there,” as Sen. Angus King (I-Maine) told Defense News of Navy carrier defenses against hypersonic missiles. “I'm not prepared to say the carrier is obsolete, but I say that this weapon undermines the viability of the carrier.”

At least the Navy still has time to work out the kinks: In October, USNI News reported that the Ford's deployment date could be pushed back as late as 2024, six years after the original deployment date of 2018.