"On rare occasions, there are service members who are unwilling to conform their behavior to our ethical standards. In those disappointing situations, appropriate responsive action must be both timely and just. Our Navy and the American people expect no less." 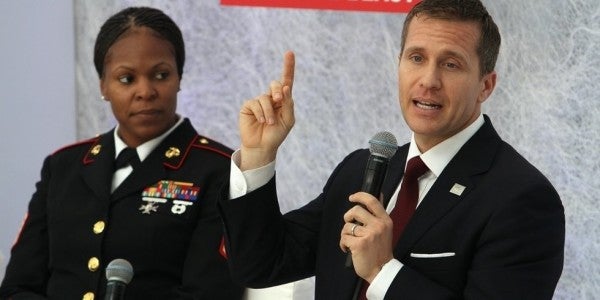 The Navy's top officer has ordered a review of how it investigates and separates sailors for misconduct following former Navy SEAL Eric Greitens recent transfer to the Selected Reserves and other cases, a Navy official confirmed on Friday.

Dan Lamothe of the Washington Post first reported that Chief of Naval Operations Adm. John Richardson ordered the 30-day review after Greitens returned to the Navy.

Greitens resigned in disgrace as Missouri's governor in May 2018 following accusations that he sexually assaulted and blackmailed a woman in March 2015.

He resigned as part of a plea deal with prosecutors, who dismissed an invasion of privacy charge and charges of computer tampering stemming from allegations he stole the donor list for the veterans charity he founded. Prosecutors also declined to charge him for the alleged sexual assault, citing a lack of evidence and the statute of limitations.

In a May 26 email to flag officers, Richardson wrote that he was frustrated by Greitens' return to the Navy and felt the service's policies for dealing with misconduct were “too cumbersome and slow,” forcing the Navy to retain sailors “we'd rather see dismissed from our ranks,” the Washington Post reported.

Attempts to reach Greitens on Friday were unsuccessful.

Richardson's May 30 memo to Vice Adm. Robert Burke, chief of naval personnel, did not mention Greitens by name but it made clear that sailors who betray the Navy's core values should not have a future in the service.

“On rare occasions, there are service members who are unwilling to conform their behavior to our ethical standards,” Richardson wrote in the memo, which was provided to Task & Purpose. “In those disappointing situations, appropriate responsive action must be both timely and just. Our Navy and the American people expect no less.”

The Navy also needs a better way to ensure that all incidents of misconduct are included in sailors' official military personnel files before they come up for promotion or retention, Richardson wrote.

“The methods for documenting misconduct in an official personal record can be slow and the process is poorly understood,” Richardson wrote in the memo.

“When such documentation is not completed in a timely fashion, or at all, those engaged in personnel actions such as promotions, advancements, and assignments are deprived of the opportunity to know of critical aspects of the member's service.”

WATCH NEXT: Chief of Naval Operations Statement on Recent Incidents in the Pacific