"We do not consider Adm. Moran's continued relationship with the Navy commander to be misconduct; rather, we consider it a performance issue," 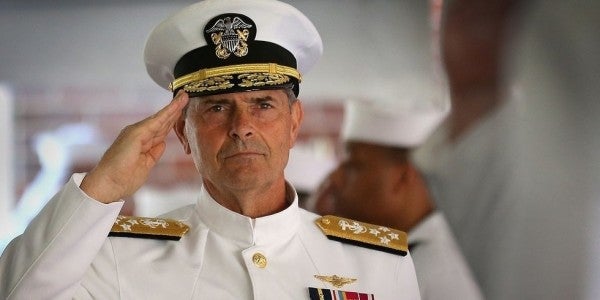 Adm. Bill Moran — who had been confirmed as chief of naval operations but he decided to retired instead — did not commit misconduct by using his personal email to seek public affairs guidance from a disgraced former Navy spokesman, the Defense Department Inspector General's Office has determined.

Investigators found Moran improperly used his personal email account to conduct official business by communicating with now retired Cmdr. Chris Servello, who was fired as the spokesman for former Chief of Naval Operations John Richardson for allegedly making unwanted sexual advances toward three women at a 2016 Christmas party while he was dressed as Santa Claus. (Servello was never charged. Some media have dubbed him “Bad Santa.”)

Servello had also served as Moran's spokesman when he served as chief of Naval Personnel.

“He understood my voice really well, and a hell of a good writer, and very good with the media, and incredibly strong instincts about public affairs, and the more we got to work together the more I appreciated his skills,” Moran told investigators.

Richardson told investigators that he knew Moran and Servello continued to maintain a personal relationship, but he was surprised to learn that Moran was also asking Servello about official public affairs matters, especially considering Richardson had assured lawmakers that Servello was no longer advising Navy leadership.

“What concerned me was that in fact after my quick survey of those emails was that was doing speech writing, was doing public affairs advice, giving guidance to [ADM Moran's] staff on public affairs matters, was helping to I think review testimony,” Richardson said in the DOD IG report. “Was doing things like — that are very involved with this transition team as [ADM Moran] prepared to become CNO, and so this was well beyond just a friend reaching out and helping a friend. This was legitimate high-level Navy strategic business being done and that's — that was a much different relationship than I was aware of. I was unaware that was going on.”

Navy Secretary Richard Spencer referred Moran's emails to the DOD IG on June 24 and the investigation began the following day. Moran announced on July 7 that he would retire rather than become CNO. Spencer issued a statement that Moran's continued communications with Servello had “caused me to call his judgment into question.”

In his response to the DOD IG report, Moran wrote he agreed that he had used his personal email account to conduct official business but he had never sent classified information in those exchanges.

He also wrote that he regrets that “some view my continuing professional relationship with this Navy commander as insensitive, inappropriate, or wrong,” adding that he had spent more than a decade fighting sexual harassment, sexual assault, and toxic environments.

Servello issued a statement on Wednesday that did not directly address the investigation's findings.

“The last four years have been an important learning experience, both personally and professionally. I wish the Richardsons and Morans all the best as they transition to civilian life,” Servello told Task & Purpose. “I appreciate the opportunity I was given to work with both leaders and look forward to moving on.”