His resignation was announced on Monday. 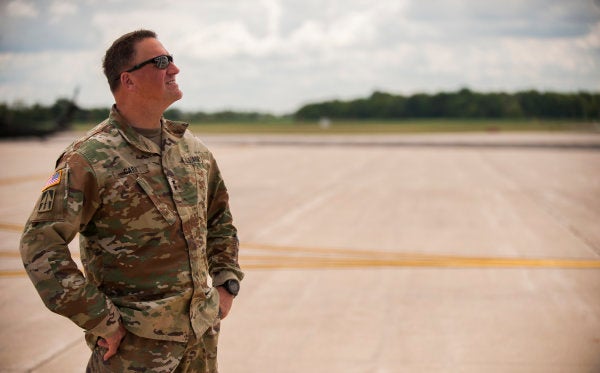 The Adjutant General of the Indiana National Guard is retiring from the Army and resigning as head of the Guard after a lawsuit was filed claiming that he retaliated against a military contractor for reporting an alleged affair with a subordinate.

Shari McLaughlin was hired as a Family Assistance Specialist in May 2017 with Skyline Unlimited — a government contractor that works with the Indiana National Guard. According to McLaughlin's lawsuit, Maj. Gen. Courtney Carr had a “vendetta” against her after she revealed the sexual relationship he was allegedly having with her in-house mentor, Colleen Nicholson.

Nicholson was reportedly married to a retired active-duty soldier at the time of the alleged relationship.

According to publicly available court documents, Nicholson and Carr's relationship began in July 2017, just months after McLaughlin came on board. Nicholson reportedly shared things about her relationship with Carr with McLaughlin, the court documents allege, including “sexual images, videos, texting, rendezvous times and locations, and plans to add a third male party to their liaisons.”

In September 2017, the documents allege, Nicholson asked McLaughlin to monitor a storage room door at a hotel during a mental health convention, from which she and Carr eventually emerged “smoothing their clothing and straightening their hair.”

Nicholson later told McLaughlin that they had sex, the documents say.

McLaughlin also reportedly learned of an affair that her direct supervisor, Noelle Butler, was having with Lt. Col. William Poag — the J9 Officer in Charge. According to the documents, Butler, Poag's subordinate, was “bragging” about the affair. McLaughlin met with Poag and told him as much, to which he allegedly admitted to having the affair.

In May 2018, McLaughlin was reportedly brought in by Col. DeRue from the Indiana National Guard's Inspector General, who was investigating the alleged affair between Butler and Poag — as well as a second affair, between Butler and a member of the J9 staff, Sgt. 1st Class Brandon Ledbetter.

The documents explain that Butler, at the time of the alleged affairs, was married to then-Master Sgt. Joshua Butler, who has since been promoted to Sgt. Maj.

While speaking with DeRue, McLaughlin reportedly “confirmed that she was aware” of the two affairs, and then “disclosed information” about the relationship between Carr and Nicholson, which DeRue allegedly was not aware of.

“Upon hearing this information, Colonel DeRue appeared stunned and told McLaughlin that her information was beyond the scope of his investigation and that he would have to report it to his higher-ups,” the court documents say.

All of the concerned parties — Carr, Nicholson, Butler, Ledbetter, and Poag — found out about McLaughlin's comments to DeRue about their sexual relationships, according to the documents.

They then “embarked on a program of retaliation,” according to the documents, which allegedly included surveillance of McLaughlin and “demanding that McLaughlin notify her supervisor” when she wasn't going to be in the office. She also received a write-up at one point “based on false accusations” which accused her of being rude to coworkers and customers, tardiness, and more, the documents said.

McLaughlin resigned on July 6, 2018 “because the work environment had become too unsafe and toxic,” the documents said. She then accepted another job as the Indiana State Coordinator for the Building Healthy Military Communities (BHMC) program with Alutiiq Global Solutions and Professional Training. The BHMC program was meant to work with the Indiana National Guard's Personnel Directorate.

However, on September 10, 2018, the documents say, Carr allegedly called Alutiiq and said that the Indiana National Guard would not work with BHMC if McLaughlin was the state coordinator, and that she was “unfit to represent the state.”

McLaughlin was fired soon after.

The issues with Carr caused McLaughlin to suffer from “lost income, lost benefits, insomnia, anxiety,” and more, according to the court documents.

Carr said in a press release on Monday that he would be resigning, effective this Friday, August 16th. Brig. Gen. Timothy J. Winslow will be taking over as interim adjutant general until Indiana Gov. Eric Holcomb appoints a permanent replacement.

“I want thank Governor Holcomb for the distinct opportunity to serve as the adjutant general,” Carr said in a statement. “It has been my honor to lead the exceptional soldiers and airmen of the Indiana National Guard.”