Lets break it down 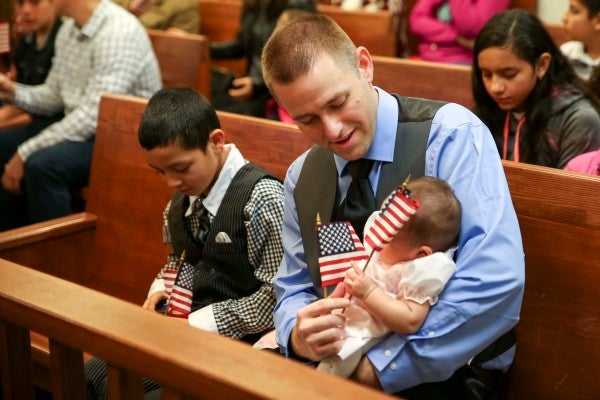 Since the confusing rollout of a policy affecting the path to citizenship for some children of U.S. service members and government employees, officials have since attempted to clarify that the change will only effect a small number of people a year.

In the text of the policy update released on Wednesday, U.S. Citizen and Immigration Services (USCIS) said that the policy impacted “children residing abroad with their U.S. citizen parents who are U.S. government employees or members of the U.S. armed forces.”

But that's not quite the case, as USCIS officials later clarified: it affects only children who were not U.S. citizens at birth, which means children adopted overseas, and children born to non-U.S. citizen parents.

Let's break this down.

“If you are a permanent resident and you have a child, there's no U.S. citizenship transmission that you can do to the child on the day of their birth,” they added.” You can't transmit what you don't have.”

The USCIS official said that they estimate this policy change will affect 20-25 people a year, and it will not have any affect on anyone born in the United States.

U.S. service members who apply for citizenship for their child while abroad can complete the entire process from overseas, the official added, “from application through oath.”

A USCIS official said that the agency has been coordinating with the Department of Defense since May this year on the change. The policy change came about after the State Department “approached” USCIS and asked for them to change the way they were interpreting the law, the official said.

“I think our policy interpretation is sound, but it isn't what the law says,” the official said. “If I could change the law to our interpretation, I would happily do so. But the fact of the matter is, it's just not what the statute says.”

“The State Department being in variance with us can cause problems down the road if we were to issue a citizenship certificate and the family that that the child was a citizen, and then went to apply for a passport — which is really the most important document for evidence of citizenship — and were to be denied at that point,” the official added. “So we and the State Department have to be on exactly the same page.”

When reached for comment, Pentagon spokeswoman Lt. Col. Carla Gleason said in a statement that the Defense Department is “committed to ensuring affected families are provided the appropriate information, resources, and support during this transition” before referring people to USCIS' Military Resource Page for further information

“I find this change in policy particularly offensive because it extends the President's hatred for immigrants to members of our military who are faithfully serving our nation,” Smith said in a statement. “The current policy has been in effect since 2004 and the underlying law that allows for this recent change in policy has been in effect since 2001, so why now?”

Iraq war veteran and Senator Tammy Duckworth said in a letter to Acting DHS Secretary Kevin McAleenan and Acting USCIS Director Ken Cuccinelli that the policy is “confusing, cynical, unnecessary and unfair. … The bottom line is that this offensive policy update will harm members of the U.S. Armed Forces, military families and civil servants who serve our Nation abroad.”

Cuccinelli doesn't see it that way. The policy “aligns USCIS' process with the Department of State's procedures for these children,” he wrote in a Wednesday afternoon tweet. “That's it. Period.”