U.S. Citizen and Immigration Services will now provide naturalization services to U.S. military members at just four "hubs" one week each quarter as part of its ongoing push to close down offices around the world and "streamline and make immigration processing more efficient," the agency announced Monday 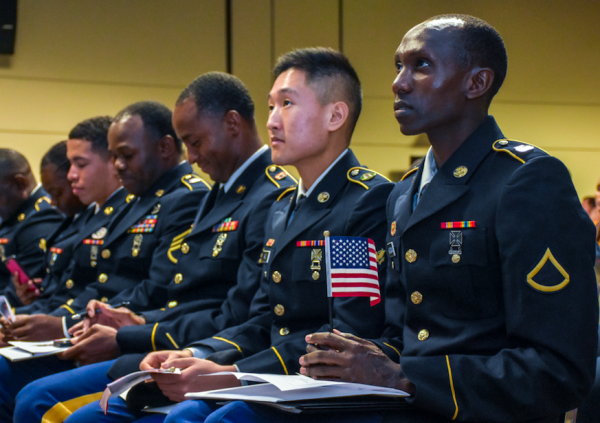 U.S. Citizen and Immigration Services will now provide naturalization services to U.S. service members and their families at just four “hubs” one week each quarter as part of its ongoing push to close down offices around the world and “streamline and make immigration processing more efficient,” the agency announced Monday.

In August, USCIS announced that all but seven of its international offices would close. As of September 30, the agency has closed offices in Moscow, Russia; Seoul, South Korea; Ciudad Jaurez, Mexico; Manila, Philippines; and Monterrey, Mexico, according to the official.

When asked how closing down offices will make the process more efficient, a USCIS official said that they will “maximize agency resources” by having agency staff on assignment, or the State Department's Consular Affairs, handle in-person benefit requests. Things that don't require an in-person visit will be handled by domestic staff.

The USCIS official told reporters that the agency is not worried about its ability to handle the growing volume of requests for one week a quarter at only four hubs, but that if they find it's not manageable, “we will definitely revisit the possibility of adding another hub.”

“You're moving from having a field office directly there, that's doing these applications as they basically come into the door,” the USCIS official said. “So for instance in Seoul if they traveled…to Camp Humphreys, they would be able to schedule that on a more ad hoc basis.”

“What we're doing now — and it still won't affect time frames, we think, too much — is we're basically setting up a schedule … We anticipate that it's actually not going to affect the timeframes very much and if we find that it is, or we find that there are issues, we will definitely revisit and review our procedures and see if we have to make some modifications along the way.”

It's unclear if travel to these hubs will be compensated — the USCIS official said applicants will be “working with the [Defense Department] to hopefully provide some transportation to those locations,” but that they are typically responsible for their own travel arrangements.

“If a service member is unable to travel to the designated hub during the week that quarter that USCIS officers will be there, the agency “will follow existing procedures and coordinate with the applicant on a case-by-case basis,” according to the agency release.

When asked if the closures would to make the naturalization process harder for U.S. service members and their families, a USCIS official demurred.

“[W]e strive very, very hard to make this a seamless transition and a seamless process, and our first priority has been and always will be our military personnel.”

“Ensuring that the men and women who dedicate their lives to protecting the United States of America can become citizens while serving abroad is of paramount importance,” USCIS acting director Cuccinelli said in the release.