Trump’s tax cut was a disaster for some Gold Star families, but it’s a symptom of a larger problem

This year's tax code had an immediate financial impact on many Gold Star families, but it may be an indicator of a much bigger problem. 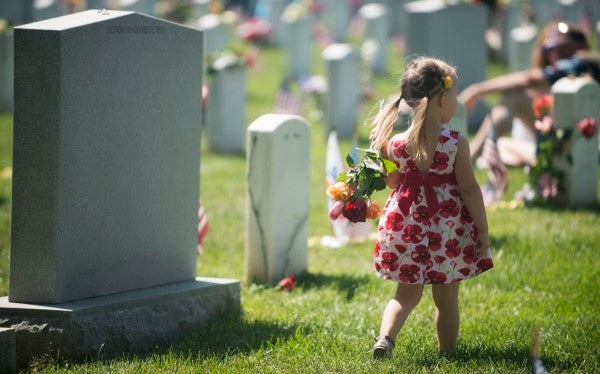 For some, tax season brings a small boon in the form of a refund. For others it can be a source of stress.

But Theresa Jones sees it as an annual reminder of her husband, Navy Lt. Cmdr. Landon Jones, who was killed in a helicopter crash on Sept. 22, 2013.

“My kids are owing the government back money, that the government gave them, because their dad died, and my kids have to pay it back,” Jones told Task & Purpose. “And every year this comes around and it’s just this reminder of this tragedy, and it’s literally like throwing salt in the wound.”

Military widows and widowers who put their benefits in their child’s name saw a significant spike in their taxes this year. To make matters worse, Jones, along with three other military widows who spoke with Task & Purpose, said they were not aware how much their taxes would increase and were unable to budget or otherwise prepare for the hike in cost.

“It was a very hard pill to swallow, that they’re even taxed; that they have to give money back in general, as kids,” said Jones, who provided Task & Purpose with copies of her tax documents for 2018 and 2017. “I’ve been sitting here for four days trying to figure out why it’s so much more.”

The increase was due to a change with the “Kiddie Tax” under the Tax Cuts and Jobs Act, which President Donald Trump signed into law in December 2017. Previously, survivors benefits that were allocated to the children of a fallen service member were taxed at the parent’s rate. Under the new tax code, those benefits are instead treated the same as a trust or estate, which means they can be taxed at a rate as high as 37%, and that threshold is reached faster than it was before.

While the change in the tax code may have had an immediate financial impact on Gold Star families this year, it may be a consequence of a more pervasive problem with how survivors benefits are classified and paid out.

Just the tip of the iceberg

Though the change in the tax code has had a direct impact on Gold Star families this tax season, some advocates argue that it’s a symptom of a larger issue: A rule against concurrent receipt or “double dipping,” which bars recipients from getting two simultaneous types of federal monetary benefits.

Beyond the Service Members Group Life Insurance policy, which provides a one-time lump-sum payment up to $400,000 to a beneficiary if the service member elected to pay into it, there are two different types of survivor benefits for military spouses and children.

There’s the Department of Veterans Affairs Dependency and Indemnity Compensation (DIC), which provides roughly $1,300 per month to a surviving spouse, regardless of the service members’ grade or length of service, and is not taxed, nor is it transferable.

And then there’s the Survivor Benefits Plan (SBP), a Department of Defense insurance annuity that varies in amount depending on the service member’s rank, and is based on 55% of projected retired pay with 30 years of service.

Because recipients can’t double dip, the VA benefit and the military benefit are offset — meaning that if a survivor chooses to put both the VA benefit and the DoD benefit in their name, then they’ll see a $1 reduction in their SBP for every $1 they receive from their DIC plan. This dollar for dollar offset in survivors benefits has become known as the Widow’s Tax.

This offset typically means that survivors are left with just the VA benefit, which tends to be higher, and is roughly $15,800 a year. As of last year 65,255 military widows and widowers were subjected to this offset, according to a fact sheet provided by the Tragedy Assistance Program for Survivors (TAPS), a non-profit that advocates for and provides support to military families who lost a loved one.

To get around the Widow’s Tax, survivors can put their SBP in their child’s name, and for years, it was a reliable workaround to ensure that military spouses with children who lost a loved one could actually take home the benefits they were entitled to. But even that fix has pitfalls: If a parent puts their military survivors benefits in their child’s name, those benefits disappear when the child turns 18, or 22 if he or she is a full-time student. Additionally, if a survivor remarries, then he or she forfeits their VA benefit.

This has forced Gold Star families to make tough financial decisions on how they’ll allocate their benefits, whether they’ll remarry, and what will happen as their kids grow up.

‘It’s a survivor’s benefit. It’s not a tax shelter for us’

Cheryl Lankford, whose husband U.S. Army Command Sgt. Maj. Jonathan Lankford, Sr. died in Iraq on Sept. 22, 2007, told Task & Purpose that she saw her taxes for her 14-year-old son’s survivor benefits increase from roughly $100 and $200 dollars per year to about $2,500 this year.

“I heard rumors that this year we were gonna be paying a little bit more, especially after the news broke that the taxes have changed and there may be a bit of an increase,” Lankford told Task & Purpose. “I had no idea it would be quite that much money. That was a shocker for me”

It was the same for Jessica Braden-Rogers. For the last seven years since her husband, Army Capt. Michael Braden, died on April 18, 2012 while deployed to Afghanistan, Braden-Rogers has paid roughly $1,100 in taxes for her son’s benefits. This year she said it jumped to $4,471.

“None of us knew any of this until we all started filing our taxes and had such a significant increase in our tax burden,” said Braden-Rogers, who has since remarried and no longer receives the VA benefit. “We’ve always had a tax burden, but for me, quadrupling the tax burden of a Gold Star child is completely unfair. It’s cruel. I mean why would you tax a nine year old?”

When Jessica Johns started seeing comments on social media about how the tax code may impact Gold Star families like hers — Johns’ husband, Army 1st Lt. Jonathan Rozier was killed in Iraq in 2003 — she told Task & Purpose she thought the reactions may have been overblown. Then she did her taxes, too.

Like Braden-Rogers, Johns has also remarried and subsequently lost her VA survivor benefits. Her 16-year-old son Justin, however, still receives the military’s Survivor Benefit Plan, and now those benefits are being taxed at a higher rate than ever before.

Last year Johns paid around $400 in taxes for her son’s benefits. This year she claims to have paid almost $3,000.

“I kind of was in denial,” Johns told Task & Purpose. “I mean I was shocked first of all and then I started to get mad ’cause I’m like, well first of all, the name of the annuity is Survivor Benefit Plans so I don’t understand why they tax it in the first place, but if they are going to tax it, why are they all of a sudden taxing like we are trying to shelter money in our kid’s names so that we don’t get taxed on it?”

“It just made absolutely no sense to me at all,” Johns continued. “That’s really what they’re doing and they’re taxing it like we are rich people and pushing some of our income into our children’s names so that we can shelter that from having to pay a higher tax bracket for us, but that’s not what we are doing. It’s a survivor’s benefit. It’s not a tax shelter for us.”

The unexpected tax increase has led to some tough choices for the survivors who spoke with Task & Purpose: Cancelled vacations and trips; no summer camp for the kids; a tighter budget year-round; and a monthly, if not weekly re-assessment of finances as parents struggle to pay this year’s taxes and plan for next year.

And then there’s the impact it has on their families that goes beyond the financial burden the tax hike has imposed.

“It was heavy on my heart when I realized that my son receives this money because his dad died,” Lankford said, speaking of her son Jonathan. “Now we feel like it’s a challenge for us because he’s a child, he’s paying taxes, but he’s paying taxes on the money that was left for him because of his father’s service.”

“That’s a lot for a kiddo to take in,” Lankford continued. “He’s not unaware, and most of our kids are not unaware of what’s happening around them. They know what’s going on. And at the same time, we want to provide for them, we want to shelter them from these things, but it’s important as surviving spouses that we come together and we help Congress understand how important it is to our families and to our well-being, that this can change. This needs to change. It needs to be changed soon.”

Repealing the offset could end the tax issue

“In layman’s terms, surviving spouses are having to give their benefits to their children in order to receive all of the benefits they have earned,” Ashlynne Haycock, the deputy director of policy and legislation for TAPS told Task & Purpose.

“The tax code isn’t the issue,” said Haycock, the Widow’s Tax is.

Under the new tax code “those benefits are being taxed at an astronomical rate,” Haycock explained. “If we end the offset, those benefits will be reassigned back to the spouses, so they’ll get all of the benefits they have earned, and we won’t have this tax issue going forward.”

Advocates like Haycock argue that the military’s Survivor Benefits Plan and the VA’s Dependency and Indemnity Compensation are two separate benefits that come from different pots — SBP is an insurance annuity, and DIC is a VA benefit — and so shouldn’t count against each other.

Currently, two bills aimed at removing the offset from survivors benefits have been introduced to the House and Senate; the Military Widow’s Tax Elimination Act of 2019, sponsored by Sen. Doug Jones (D-Ala.); and the Military Surviving Spouses Equity Act sponsored by Reps. Joe Wilson, (R-S.C.) and John Yarmuth, (D-Ky.).

Even with bills to remove the offset introduced the House and Senate, survivors like Johns, Braden-Rogers, Lankford, and Jones are left to deal with the fallout of this year’s tax season on their own.

“A lot of us as military widows, many of us didn’t have jobs, didn’t have careers, when our spouses were killed, because we had followed our husbands around,” Jones, who works part-time in real estate, in between going to college and caring for her sons, told Task & Purpose.