To take a migrant child from her parents at a U.S. point of entry, place her in a just-erected government... 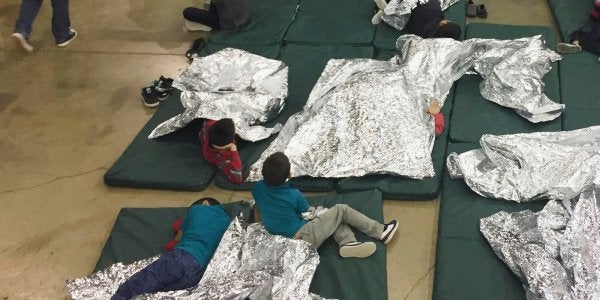 To take a migrant child from her parents at a U.S. point of entry, place her in a just-erected government tent city, and keep her separated from family costs the federal government a whopping $775 per child per night, according to the Department of Health and Human Services — more than twice what it would cost to house the children in detention with their families, and nearly six times more than a brigadier general's or rear admiral's housing allowance for New York City.

Occupants at Casa Padre, an immigrant shelter for unaccompanied minors, in Brownsville, Texas, are seen in this undated photo distributed ed by the U.S. Department of Health and Human Services June 14, 2018.HHS

The policy — which, under the Trump administration's “zero tolerance” ramp-up of border arrests, has left officials unable to account for as many as 6,000 children in custody — costs so much because there's never been any major infrastructure for holding and arresting that many kids: the “the sudden urgency to bring in security, air conditioning, medical workers and other government contractors far surpasses the cost for structures that are routinely staffed,” officials told NBC News, which first reported the $775 per child per night figure Wednesday morning.

That amounts to a cost of about $23,573 per child per month, on average. By comparison, an unaccompanied active duty flag officer with a rank of O7 receives a basic allowance for housing of $4,053 per month to live in New York City, one of the military's most costly BAH locations. (An E4 in New York receives $2,835 a month in BAH, or roughly 1/8 of the cost of housing an unaccompanied minor child who was taken from her family at the U.S. border.)

This undated photo provided by the U.S. Department of Health and Human Services' Administration for Children and Families shows beds at the shelter used to house unaccompanied foreign children in Tornillo, Texas.HHS

Officials told NBC News that housing the children in a detention center with their parents would likely cost around $300 a night. But the administration has not taken that route, arguing that taking children from their parents when they cross the border — even if they are presenting themselves at a station of entry to claim asylum — is an appropriate form of law enforcement, whatever the cost.

“It was a simple decision by the administration to have a zero tolerance policy for illegal entry, period,” Trump adviser and immigration-policy architect Stephen Miller told the New York Times earlier this week. “The message is that no one is exempt from immigration law.”