As the CEO of Task & Purpose, I’ve tried to create a community that is above partisan politics and all... 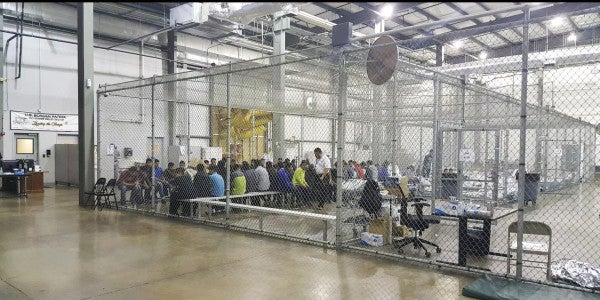 As the CEO of Task & Purpose, I’ve tried to create a community that is above partisan politics and all that divides us today. I’ve also tried to make this a place that gives voice to multiple sides of an issue. If our community, those of us who have shared experiences in battle and in service, cannot discuss things we don’t agree on, our country is truly f*cked.

That said, I’m sure this is going to piss off a few readers, inspire some to stomp their feet and swear they aren’t coming back. Good riddance.

I stand for the National Anthem. And when I do, I think of all the great things our country has done and what it has stood for in the world. I think about friends I lost overseas. I think about their families. I think about the remarkable Marines I fought alongside. And I think about my own family’s story, fleeing persecution from Russian pogroms and seeking asylum in the United States.

Two weeks ago, I got to meet Bronia Brandman, a Holocaust survivor who was torn from her family at Auschwitz at the age of 12. One of six kids, she was the only member of her family to survive the war. She asked whether America would open its doors to children like her today.

Sadly, I think we all know the answer.

That night, I came home, held my kids a little longer.

I can only imagine the hell that parents, fleeing their own persecution not all that different from the pogroms, seeking asylum and a better life like so many Americans before them, are going through after getting separated from their children. There but for the grace of G-d go I.

There’s no doubt we have a broken immigration system and previous administrations have all failed to adequately address the problems, but separating children from their families? That's not what our country stands for.

And it is a terrible policy prescription that takes the work of one government agency and multiplies it by a magnitude across multiple agencies and a vastly greater caseload. Children are taken from the families under DHS and moved into HHS. Cases expand from one to separate cases for each family member. It simply creates vastly more work for an already overburdened immigration system.

As conservative Supreme Court Justice Anthony Scalia stated in Reno v. Flores, caring for children “is easily done when the juvenile’s parents have also been detained and the family can be released together.”

The administration argues that this absurd policy is more humane than the alternative, but using children as leverage to deter families fleeing three of the most dangerous countries in the world — El Salvador, Guatemala, and Honduras — is simply un-American. By the way, for migrants who are screened from these countries, high rates of asylum are granted based on credible fear. Now, those asylum-seekers have another fear: that the U.S. will do to their families what criminals and tyrants back home couldn't manage.

That’s not what our flag stands for.