‘This Doesn’t Change A Whole Lot’: Pentagon Pushes Back On ‘Deploy Or Get Out’ Resulting In Mass Dismissal

The Pentagon’s much-hyped “deploy or get out” policy — which went into effect on Oct. 1 — is not likely... 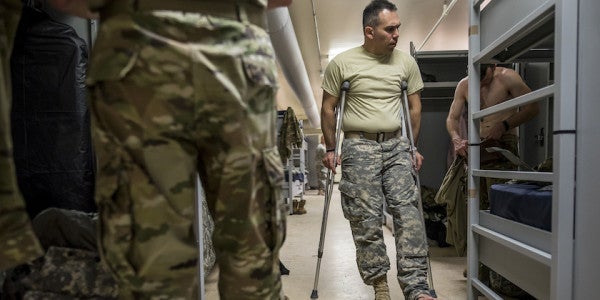 The Pentagon’s much-hyped “deploy or get out” policy — which went into effect on Oct. 1 — is not likely to result in a mass discharge of non-deployable troops, as some news outlets have implied, according to a Pentagon spokeswoman.

“There have always been ways for the military to discharge service members for medical reasons,” Pentagon spokeswoman Jessica Maxwell told Task & Purpose. “The biggest thing the new policy does is tighten things up, but it doesn’t change a whole lot.”

Task & Purpose contacted the Pentagon after a careful review of the policy indicated that it does little more than clarify and reinforce existing retention policies so that they may be more consistently applied across the force.

There were a total of 126,000 active duty, National Guard, and Reserve troops considered non-deployable as of Aug. 31, according to the DoD. The vast majority of those are non-deployable due to “temporary” personal, medical, or administrative issues. For example, a soldier who missed a periodic dental checkup would make the list, as would, say, a Marine nursing a hairline wrist fracture.

It is only when a service member has been — or is expected to be — non-deployable “for more than 12 consecutive months” that they become vulnerable to involuntary separation.

But that doesn't necessarily mean they are more vulnerable than they were before. “Deploy or get out” establishes a more streamlined system for tracking how many troops in each service branch are ineligible for overseas duty and for what period of time. It does not, however, supersede a longstanding federal law that prohibits the DoD from forcibly discharging service members or denying them reenlistment “based on a determination that the member is unsuitable for deployment or worldwide assignment” unless they have twice been assessed to be “unsuitable for continued service” by a Physical Evaluation Board.

“We don’t expect to see a massive dismissal of service members,” Maxwell said.

And though there has been much ado about the 12-month timeline, that, too, is nothing new.

Prior to the implementation of “deploy or get out,” it was also the case that ill and injured service members could be granted “temporary limited duty” for two periods of 6 months before they had to be referred for revaluation to determine whether or not they should be discharged or retired due to their disability.

Maxwell insisted that the idea behind the policy was never “to push people out of the military,” but rather “encourage service members to get off temporary non-deployable status.” She also pointed out that troops wounded in combat are exempt from the policy.

It seems the Pentagon itself is somewhat responsible for the confusion reported by other media outlets.

When “deploy or get out” was formalized in February, Defense Secretary Jim Mattis told a roomful of reporters that the justification for the policy all boiled down to fairness — or, rather, a perceived lack thereof. Recounting a recent conversation he had with the wife of a soldier who had deployed six times in 11 years, Mattis explained that the abundance of ill and injured troops had left a disproportionate few to shoulder the brunt of the war burden.

“That brings sharply into focus that some people are carrying more than the share of the load than I want them to carry,” he said. “They need time at home. They need time with their families.”