Trump wants more armed US troops at the border. The Pentagon might send cooks and lawyers instead

Trump wanted more U.S. troops at the border, but this may not be what he had in mind 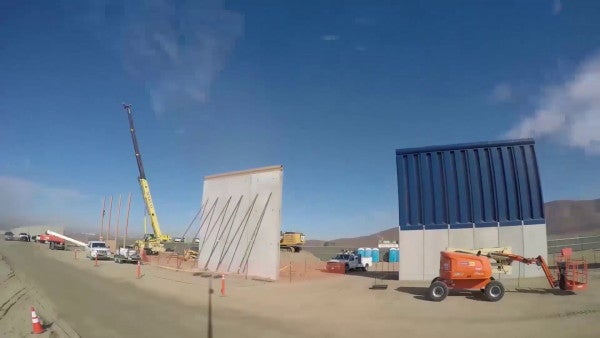 President Donald Trump tweeted on Wednesday that the Pentagon is “now sending ARMED SOLDIERS to the Border,” an escalation on his declaration in early April that he's “going to have to call up more military” to defend U.S.-Mexico border.

But when the commander-in-chief imagined a fresh round of troop deployment to the southwest border, he probably didn't mean military cooks, lawyers, and drivers.

The Department of Homeland Security is requesting that the Pentagon deploy 300 military personnel at the border to help with incoming migrants, mostly to help transport detainees to detention centers and “hand out snacks and refreshments,” according to a report from the Washington Post,

While Military personnel are broadly barred from engaging in law enforcement activities due to the Posse Comitatus Act of 1878, the Washington Post reports that the request would “grant a temporary exception to the 'no contact with migrants' policy” so U.S. service members can “provide migrants food and periodically check on their welfare.”

The request has not yet been approved by acting Defense Secretary Patrick Shanahan. And according to Lt. Col. Jamie Davis told Task & Purpose, the Posse Comitatus rule regarding law enforcement activities on U.S. soil would not change if the request was approved.

Davis explained that the request would constitute a change in operation procedure, not policy. Whereas the norm for military personnel to not directly interact with migrant detainees, that's will change if cooks are helping distribute food or drivers are helping transport them from place to place.

Indeed, the DHS request specifies that when, for example, personnel help drive migrants to detention facilities, for instance, they would be in a “segregated driver's compartment,” and if they assist in distributing food detention facilities they'll be “accompanied at all times by law enforcement personnel,” per the Washington Post.

All activities that these few hundred extra personnel would assist with are in support of Customs and Border Protection, Davis said.

It's unclear if the military cooks will be making the same food for detained migrants that they make for the U.S. service members deployed there. But as one unnamed source in the Pentagon pointed out, haven't American troops been through enough?

Overheard at the Pentagon, RE: reports that US mil cooks could now be serving migrants on the southern border: "They have been through enough. Why are we giving them our green eggs and grey ham?"

SEE ALSO: Troops Assigned To The US Border Mission Are Bored As Hell