President Donald Trump has announced that U.S. troops will guard the border with Mexico. The White House was expected to... 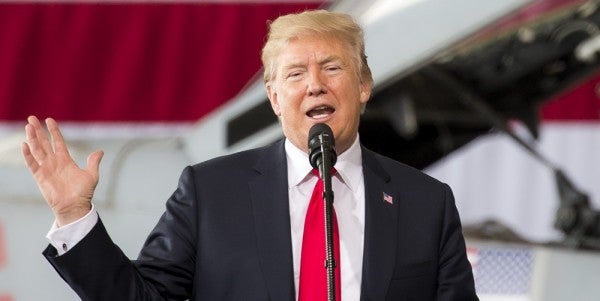 President Donald Trump has announced that U.S. troops will guard the border with Mexico. The White House was expected to release further details at a news conference later on Tuesday.

“Until we can have a wall and proper security we’re going to be guarding our border with the military. That’s a big step,” Trump told reporters.

“We cannot have people flowing into our country illegally, disappearing, and by the way never showing up for court,” said Trump, who has estimated that the proposed wall would eventually run for up to 800 miles.

It was not immediately clear if the troops would be state National Guard or federal forces. The Posse Comitatus Act of 1878 prevents the military from enforcing civilian law on U.S. soil, but it does not apply to National Guardsmen activated by states.

So far, the Defense Department has not received any orders to deploy troops to the US-Mexico border, a Pentagon spokesman told Task & Purpose.

WE WILL PROTECT OUR SOUTHERN BORDER! pic.twitter.com/Z7fqQKcnez

“We are preparing for the military to secure our border between Mexico and the United States,” Trump said at a press conference with the presidents of Latvia, Lithuania, and Estonia on Tuesday. “We have a meeting on it in a little with Gen. Mattis and everybody and I think that it’s something that we have to do.”

Trump called the United States’ border with Mexico a lawless region and he claimed that illegal immigrants are released as soon as they are caught.

He also said a caravan of roughly 1,000 vehicles heading from Honduras to the United States was broken up after he urged Mexico to stop it before it reached the US border.

“We have to have strong borders,” Trump said. “We need the wall. We’ve started building the wall. As you know, we have $1.6 billion toward building the wall and fixing the existing wall that’s falling down and was never appropriate in the first place. That’s very important.”

This is a breaking news story and will be updated.