Fox News' Chris Wallace did some on-air fact checking of Sarah Sanders' claim that 4,000 terrorists have been apprehended at the border. 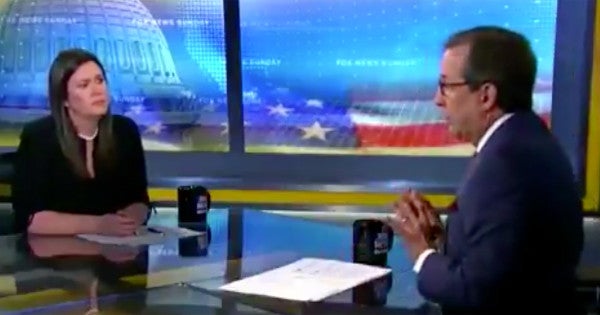 Terrorists are coming across the border! We've caught 4,000 of them! Al Qaeda is infiltrating through Mexico so we absolutely need this wall. 9/11! National security issue!

If any of these tropes sound familiar, you've probably heard something like it from President Donald Trump, Secretary of State Mike Pompeo, the Department of Homeland Security, of name-your-talking-head on AM radio.

But a segment on Fox News Sunday with Chris Wallace really drove home that this talking point is total bullshit, while showing White House spokeswoman Sarah Sanders twisting herself into pretzels trying to make the statistics fit the administration's dubious narrative.

In response, Sanders said, “We know roughly, nearly 4,000 known or suspected terrorists come into our country illegally. And we know that our most vulnerable point of entry is at our southern border.”

Wallace wasn't having any of this.

“Wait wait wait, I know the statistic,” he said. “I didn't know if you were going to use it, but I studied up on this. You know where those 4,000 people, where they're captured? Airports. Airports. The State Department says there hasn't been any terrorists that they've found coming across.”

Just for the full context, here's what the State Department's Bureau of Counterterrorism said in 2017: “At year's end there was no credible evidence indicating that international terrorist groups have established bases in Mexico, worked with Mexican drug cartels, or sent operatives via Mexico into the United States. The U.S. southern border remains vulnerable to potential terrorist transit, although terrorist groups likely seek other means of trying to enter the United States.”

Those likely other means are airports, as Wallace pointed out. It's not sending operatives into Mexico before having them walk thousands of miles through the desert.

Watch the full exchange below:

Here's the video of Chris Wallace fact-checking Sarah Sanders on her false claim that terrorists are streaming over the border with Mexico.

"The state department says there hasn’t been any terrorists found coming across the southern border." Via Fox. pic.twitter.com/ByMaa9TK2S