Key Democrat To Trump: No, The Military Isn’t Going To Build Your Border Wall

A top Democrat in Congress has vowed that lawmakers will block any attempt by the Trump administration to use U.S.... 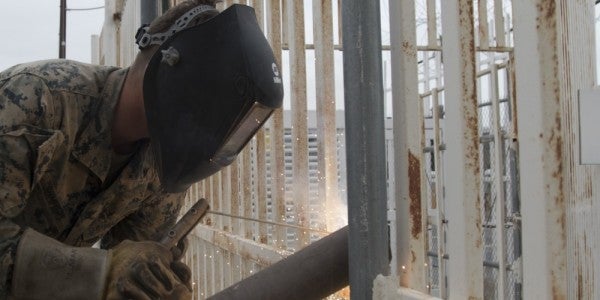 A top Democrat in Congress has vowed that lawmakers will block any attempt by the Trump administration to use U.S. service members to build a wall along the southwestern border with Mexico.

“We can certainly put legislation in that says no Department of Defense money should go towards the wall – that would include using our soldiers as part of the effort to build the wall,” said Rep. Adam Smith (D-Wash.), who is likely to be the next chairman of the House Armed Services Committee.

Both Democrats and Republicans in Congress would oppose using U.S. troops or money from the Defense Department’s budget to build such a border wall, Smith told reporters at a Defense Writers Group breakfast on Wednesday.

Smith said he does not think the Pentagon’s proposed budget for fiscal 2020 includes border wall funding, but he is not sure because the budget has not been submitted to Congress yet.

“It’s a question that isn’t really worth asking because the president will send up his budget and we’ll see – and if there is wall funding in it, we’ll all flip out and say, ‘You can’t do that,’” Smith said.

President Trump tweeted on Tuesday that he may use the military to build a wall along the U.S./Mexico border of Democrats in Congress do not appropriate the estimated $5 billion needed to build the barrier.

….People do not yet realize how much of the Wall, including really effective renovation, has already been built. If the Democrats do not give us the votes to secure our Country, the Military will build the remaining sections of the Wall. They know how important it is!

So far, the president has not asked the Defense Department to build sections of the wall, but the military is allowed to build border barriers under certain circumstances, Army Lt. Col. Jamie Davis, a Pentagon spokesman, said on Tuesday.

Smith took aim at the president’s campaign promise that Mexico would build the border wall, noting that Trump now is threatening to shut down the government if taxpayers don’t foot the bill.

“Why in the name God are we shutting down the U.S. government because we won’t pay for it?” Smith said at Wednesday’s breakfast. “The president promised us that we wouldn’t have to. I want someone to ask him – preferable every second of every day from now until we get this resolved – why is he breaking his promise?”

More than 10 years ago, the U.S. government built a barrier along part of the southwestern border, but a lot of the property where the president wants to extend the wall either private property or it belongs to Native American tribes or the elevation is too high to build a wall there, Smith said.

While Smith agreed that border security is important, he argued that the main challenge facing civil authorities is from asylum seekers, not illegal immigrants.

“You don’t need to build more security because folks are not trying to sneak in,” he said. “They’re turning themselves in. I don’t deny there is a problem. There has been a significant increase in people seeking asylum, but the solution to that is not to harden the border. The solution to that is to hire more judges and expedite the process for how you get through it.”