"We'll work with the Democrats and negotiate and if we can't do that, then we'll do a – obviously we'll do the emergency because that's what it is. It's a national emergency." 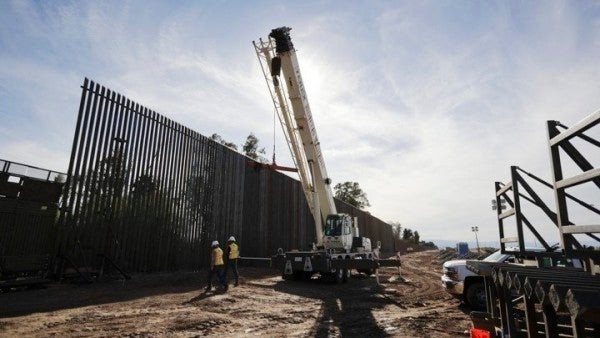 President Donald Trump has threatened to declare a national emergency to build barriers along the southwestern border if Congress does not approve funding to build a border wall by Feb. 15.

The president announced on Friday that he had reached with lawmakers to re-open the government for three weeks. But Trump was not able to secure any funding for a border wall in the temporary spending measure, according to media reports.

“Let me be very clear: We really have no choice but to build a powerful wall or steel barrier,” Trump said in a speech. “If we don't get a fair deal from Congress, the government will either shut down on Feb. 15 again or I will use the powers afforded to me under the laws and the Constitution of the United States to address this emergency. We will have great security.”

Shortly afterward, the president was more overt about his intentions to declare a national emergency should the Democrats not agree to nearly $6 billion in border wall funding.

“We'll work with the Democrats and negotiate and if we can't do that, then we'll do a – obviously we'll do the emergency because that's what it is. It's a national emergency,” Trump said, according to a White House pool report.

With the exception of the Defense Department, the federal government has been shut down for the past 35 days over Trump's demand for border wall funding. Coast Guardsmen,FBI agents,border patrol personnel, air traffic controllers,TSA agents, and other essential personnel have been working without pay since then.

Several media outlets had reported during the past six weeks that Trump was considering declaring a national emergency that would allow him to use military construction funds to build part of the wall. On Friday, the president suggested that he had not to go that route for now.

“As everyone knows, I have a very powerful alternative, but I didn't want to use it at this time,” Trump said. “Hopefully, it will be unnecessary.”