Every now and then, your friend and humble Pentagon correspondent has to poke the bear, and that means putting an... 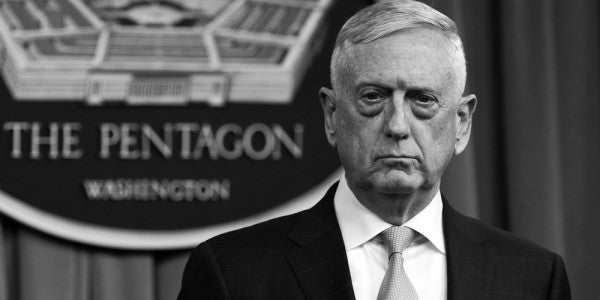 Every now and then, your friend and humble Pentagon correspondent has to poke the bear, and that means putting an uncomfortable question to Defense Secretary James Mattis.

Mattis has been very gracious so far: He has allowed this reporter to live. That’s all anyone can ask from a man who reportedly has laser beams in his eyes that can vaporize a miscreant at 15 clicks.

Most recently, Task & Purpose asked Mattis why the Pentagon has not updated its policy on separating non-deployable troops to exempt wounded warriors. On Feb. 14, the Defense Department announced that troops who “for any reason” are classified as unable to deploy for more than 12 consecutive months will be processed for administrative separation.

As written, the policy appears to apply to troops wounded in combat, but Mattis told reporters on Feb. 17 that wounded warriors need not worry about being administratively separated for convalescing from their injuries.

“If they were wounded in combat, and they want to stay in and they’ve lost their leg or something like this, and they can’t be a paratrooper anymore, then we’ll find a place to use them,” Mattis told reporters. “That’s a special category. They’ve earned that special status.”

However, the non-deployable policy has not yet been updated with Mattis’ caveat for wounded warriors, prompting this reporter to ask the secretary himself about it at a June 11 gaggle. The following is a transcript of the exchange.

Q: Mr. Secretary, you had said that wounded warriors would be exempt from the non-deployable policy. As far as I know, that hasn’t happened yet. What’s the delay?

Q: If you’re not deployable for a certain amount of time, that you’ll be separated. You had said that wounded warriors would be exempt from this policy. As far as I know, there is no exemption as we speak. What is the delay?

Q: I understand, but it has to be written down, too.

With that, Mattis took another question. The non-deployable policy will not take effect until Oct. 1, so the Pentagon still has a few months to put the secretary’s direction into writing. But after more than a week of pestering by T&P;, defense officials still could not say how long it will take to update the policy and why it has not been done already.

“The SecDef's policy on combat wounded is included in the DOD instruction which is currently undergoing coordination,” Air Force Maj. Carla Gleason, a Pentagon spokeswoman, said in an email. “Once the instruction is completed it will be available to the public.”

This reporter will keep on the case. If any readers have a better question that yours truly should ask Secretary Mattis, please let us know. Note: T&P; will not ask about UFOs – the aliens have asked us to respect their privacy.