The Pentagon has finally exempted wounded warriors from its non-deployable policy, nearly six months after Defense Secretary Mattis announced that... 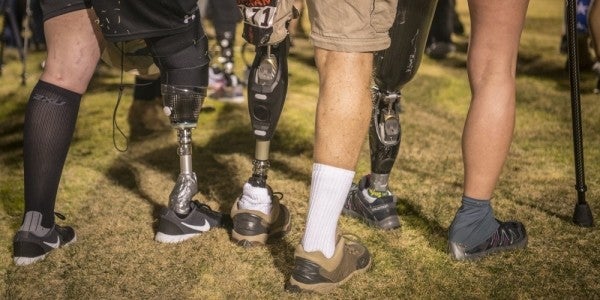 The Pentagon has finally exempted wounded warriors from its non-deployable policy, nearly six months after Defense Secretary Mattis announced that troops wounded in combat would not be separated for being unable to deploy.

Published on Tuesday, the Defense Department policy includes a provision specifically for combat-wounded troops that clearly states they will not be separated if they are unable to deploy for 12 consecutive months or longer.

Now that it is in writing, the policy reflects Mattis’ guidance from February, when he told reporters that combat wounded service members would not be involuntarily separated because “they’ve earned that special status.”

“The office of the undersecretary of defense for personnel and readiness will monitor the implementation of this guidance by all services to ensure compliance with the secretary of defense directive,” said Air Force Maj. Carla Gleason, a Pentagon spokeswoman.

The service secretaries can delegate the authority for retaining combat wounded troops and other service members to general and flag officers as well as senior civilian leaders, Gleason said on Wednesday.

About 143,000 of all active-duty, National Guard and Reserve troops were listed as temporarily or permanently non-deployable as of May 31, Gleason said. That represents nearly 7% of all troops, excluding trainees.

“The reasons vary, but they are predominantly medical,” Gleason said:

Some 2.9% (61,000) of our service members are temporarily non-deployable due to illness or injury. Our focus is to help these members heal as quickly as possible so they can get back to training with their unit. Another 1.2% (25,000) is considered permanently non-deployable and pending a disability evaluation for medical reasons. The department's goal is to render a timely disability decision and transition the member to life outside the military.

The Pentagon initially announced in February that service members listed as non-deployable “for any reason” would be processed for administrative separation if they could not deploy after 12 consecutive months of recuperation. Mattis quickly clarified that wounded warriors needn’t worry about being separated.

When Task & Purpose asked Mattis in June why it was taking so long to update the non-deployable policy to exempt wounded warriors, he replied: “There is no delay. Believe me. When I say it, that’s it.”

Other than wounded warriors, all U.S. service members are expected to be able to deploy, Mattis has said.

“I'm not going to have some people deploying constantly, and then other people who seem to not pay that price to be in the U.S. military,” Mattis told reporters on Feb. 17. “The bottom line is: We expect everyone to carry their share of the load. Sometimes things happen: People bust their legs in training or they're in a car accident. We understand that. Sometimes that even takes a months of recovery. We understand that.

“But this is a deployable military. It's a lethal military that aligns with our allies and partners.”