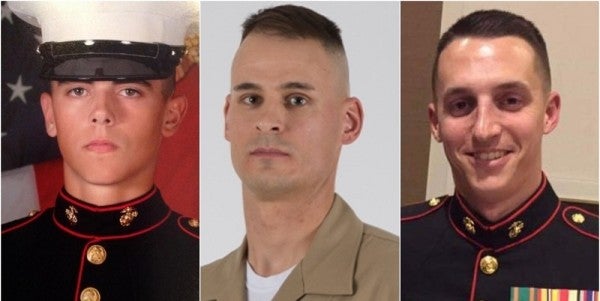 Three other U.S. service members were wounded in the attack. An Afghan contractor who was initially reported as killed was later found alive with non-life threatening injuries.

The three Marines arrived in Afghanistan on Oct. 2 as part of a rotation with Georgian troops to Afghanistan that is scheduled to last until the end of May, Marine Forces Reserve said in a statement.

“Our focus in the wake of this attack is to support the family, friends and loved ones of our fallen Marines,” the Marine Forces Reserve statement says. “These Marines are honored for their extraordinary bravery and for their direct contribution to the defense of this nation. The circumstances surrounding the attack are still under investigation, with no specific details yet available.”

Both Slutman and Hines served as 0311 Infantry Riflemen with a reserve unit in Harrisburg, Pennsylvania. Hendricks was an 0331 Infantry machine gunner, whose unit was based in Garden City, New York. They all deployed to Georgia from the end of July until Oct. 1 before arriving in Afghanistan.

Slutman was a 19-year veteran of the Kentland Volunteer Fire Department in Maryland, according to a post on the fire department's Faceook page. He also spent 15 years as a New York City firefighter and received an award in 2014 for saving an unconscious woman from a fire in the South Bronx, the New York Post reported on Tuesday.

He joined the Marine Corps in November 2005 and served as an 0311 Infantry Rifleman, according to Marine Forces Reserve. He had deployed to Iraq from May 2008 to April 2009; Mozambique from July to August 2010.

Hendricks joined the Marines in October 2012. He was on his first deployment, first to Georgia and then Afghanistan. His awards include the Selected Marine Corps Reserve Medal, National Defense Service Medal, Global War on Terrorism Medal, and Armed Forces Reserve Medal.

All three Marines could receive additional awards as their service records are updated.

Sen. James Inhofe, (R-Okla.), committee chairman, asked his fellow lawmakers to bow their heads and observe a moment of silence in honor of the fallen Marines' sacrifices.

“As we hold this hearing, approximately 41,000 Marines are forward-deployed or postured in more than 60 countries around the world – some in harm's way, as we found out all too well yesterday – all engaged, doing exactly what you expect of them,” Marine Corps Commandant Gen. Robert Neller told lawmakers on Tuesday.

UPDATE: This story was updated on April 10 with more information about the three Marines.