On its first combat deployment, the Marine Corps’ F-35 bombed both the Taliban and ISIS

"Every single one of the pilots employed ordnance in theater. So, we were very busy." 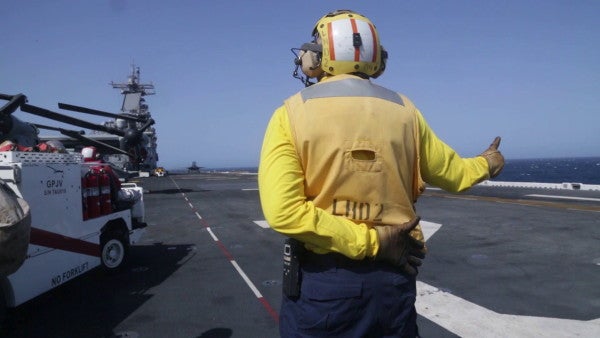 As it returns from its first combat deployment, the Marines' version of the F-35 is no longer a baby-faced boot.

“We overall supported more than 50 days of combat flying for over 1,200 flight hours,” Shoop told Task & Purpose. “We supported both Operation Freedom's Sentinel up in the Afghanistan region as well as Operation Inherent Resolve over Syria/Iraq. We employed ordnance in both theaters on numerous days,” Shoop said. “Every single one of the pilots employed ordnance in theater. So, we were very busy.”

The Essex quietly left San Diego in July along with the F-35B squadron and the 13th Marine Expeditionary Unit embarked. The F-35B got its first taste of combat in September against a Taliban weapons cache in Afghanistan.

The aircraft that flew the mission had two names inscribed on it, Shoop said: Medal of Honor recipient Capt.Henry Talmage “Hammering Hank” Elrod and Lt .Col. Christopher “Otis” Raible, the squadron's former commander, who was killed in 2012 while repelling a Taliban attack on Camp Bastion while armed only with a pistol.

During its deployment, the F-35B squadron flew close air support missions over both Afghanistan and Syria, Shoop said. In Syria, the aircraft also helped assess the damage done by coalition airstrikes in bad weather because the F-35's radar is far better than the F/A-18 Hornets' sensors.

Neither Syrian or Russian air defenses attempted to engage the F-35Bs during the missions against ISIS, he said.

“We would see Russian airplanes airborne as well as Syrian, but everyone maintained their lines of de-confliction that were set up prior,” Shoop said.

Overall, the F-35 exceeded expectations during its first deployment, Shoop said. The squadron was able to keep 75 percent of its aircraft operational at all times, allowing it to “fly pretty much at will.”

All of the F-35 pilots were awarded air medals because of the high number of combat missions they flew, said Col. Chandler Nelms, commanding officer of the 13th MEU.

Some of the MEU's Marines also contributed to the fight against ISIS, Nelms said. An infantry platoon and a CH-53E detachment went to Iraq to provide a reaction force and assault support airlift, and an artillery platoon deployed to Syria with M777 Howitzers.

Nelms declined to say if any of his Marines had been nominated for valor awards.

The Essex is slated to return home soon, but not everyone with the MEU is coming back. Cpl. Jonathan Currier was declared dead in August after falling overboard in the Mindanao Sea. Currier was a CH-53E Super Stallion crew chief.

“The loss of Cpl. Currier is felt across the MEU and across the ARG and it has been since last August,” Nelms said. “Everybody misses him. We just recently held a memorial on our return transit to continue our remembrance of his selfless service and honor his life. It was a tough loss and our hearts just really go out to his family.”

WATCH NEXT: This Week In War – Episode 1