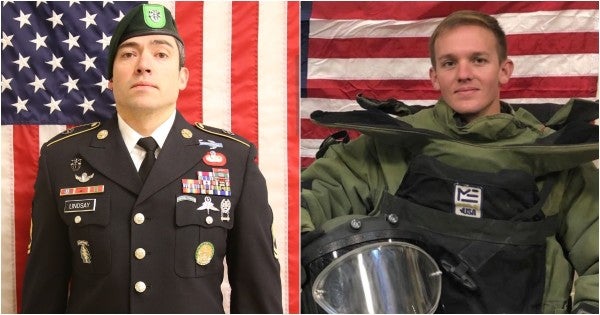 The Department of Defense on Saturday identified the two soldiers who were killed in Afghanistan's Kunduz Province on Friday as an explosive ordnance disposal tech and a Green Beret.

Both were stationed at Fort Carson, Colorado.

The two died from wounds sustained while engaged in combat operations, the Pentagon said. The incident remains under investigation

Lindsay's deployments include five tours to Iraq supporting Operation Iraqi Freedom and Operation New Dawn, one to Tajikistan in 2016 in support of the Counter-Narcotics Terrorism mission there; and one to Afghanistan supporting Operation Freedom's Sentinel, U.S. Special Operations Command said in a statement.

“The 10th SFG (A) Family is deeply saddened at the loss of Sgt. 1st Class Will Lindsay,” 10th SFG (A) commander Col. Lawrence Ferguson said. “Will was one of the best in our formation, with more than a decade of service in the Regiment at all levels of noncommissioned officer leadership. We will focus now on supporting his Family and honoring his legacy and sacrifice.”

“He told me that as soon as 9/11 happened when we were kids he knew right then that he wanted to join the Army,” his wife, Caela, told Stars & Stripes. “He was getting out of the Army in February next year and had never been on deployment. He wanted to go on deployment badly.”

Lindsay and Collette are the third and fourth service members killed in combat operations in Afghanistan so far this year.

Army Ranger Sgt. Cameron A. Meddock died of wounds suffered on Jan. 13 during a firefight in northwest Afghanistan.