The helmet that stopped a sniper’s bullet or the SAPI plate that deflected shrapnel from a roadside bomb can take... 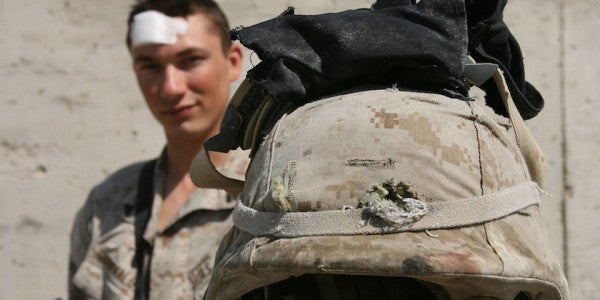 The helmet that stopped a sniper’s bullet or the SAPI plate that deflected shrapnel from a roadside bomb can take on profound significance for service members wounded on the battlefield. Now, U.S. lawmakers want to ensure that combat-wounded troops can keep the gear that saved their lives as mementos.

The most recent draft of the National Defense Authorization Act that passed the Senate in June includes a provision that would authorize services to “award” both active-duty troops and veterans their personal protective equipment.

Current policy requires service members return all standard-issue equipment — including stuff destroyed in combat — when they leave the military. But exceptions are occasionally made: As Army Times noted in a recent article, “a handful of soldiers have received their helmets, bullet holes and all, in special return ceremonies over the years,” and an Army spokesman told the publication that “there are certain circumstances in which the Secretary of Army may authorize release for sentimental reasons.”

(An Army official declined to discuss the matter with Task & Purpose, saying he was unable to comment on “matters of pending legislation.”)

While Army Times reported that the military would help current and former service members “track down their old gear” and “ensure” they “get their stuff back,” there is nothing in the proposed legislation that obligates the military to do that. It would simply authorize the services to do something they seemed to believe they already have the authority to do.Here is the provision in full (see Subtitle H):

Is there a piece of battle-damaged gear that you wish you could’ve kept after the service? Tell us about it in the comments below.