They Were America’s First Female Soldiers. Now They’re Getting The Recognition They Deserve

When Grace Banker graduated from Barnard College in 1915, women did not yet have the right vote. But lacking this... 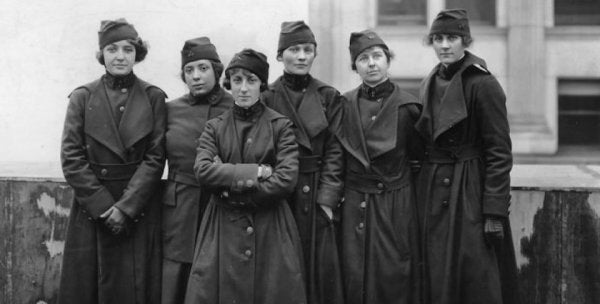 When Grace Banker graduated from Barnard College in 1915, women did not yet have the right vote. But lacking this basic right didn’t stop Banker from serving her country — and breaking barriers in the process.

Just two years later, Banker volunteered for and was chosen to head a team of women assigned to fulfill a crucial communications role alongside American. service members deployed to France as part of World War I. These women joined 190 others recruited to serve in the U.S. Army Signal Corps by connecting American and French forces via newly-available phone lines after military officials discovered that male infantrymen were struggling to connect these calls quickly enough.

The bilingual team of women served on the front lines of battle, connecting 26 million calls for the American Expeditionary Forces in France. They served at military headquarters and outposts in the field alongside the American Expeditionary Forces in France, connecting the front lines with supply depots and military commands. They became known as the ‘Hello Girls”

Yet despite this service — and despite taking a military oath —the Hello Girls were denied veteran status and benefits when they returned home.

After petitioning Congress more than 50 times for recognition, lawmakers in 1977 finally relented and passed legislation to retroactively acknowledge the military service of the women of the U.S. Army Signal Corps. And on July 3 of this year, Sens. Jon Tester, Democrat from Montana, and Dean Heller, Republican from Nevada, introduced the Hello Girls Congressional Gold Medal Act, which will award the Hello Girls with the Congressional Gold Medal, one of the nation’s highest civilian honors. On Tuesday, Sen. Tammy Baldwin co-sponsored the legislation as well.

“The Hello Girls stepped up to the plate and got the job done, and they played an important role in our nation’s history,” Heller said at the time. “They pioneered the way for female veterans, and like all of our nation’s service members – they should be recognized for their bravery and contributions,”

“I’m so proud to join this bipartisan effort to honor the brave, trailblazing women who stepped up to serve their country, and to acknowledge their decades-long fight to be given the recognition they deserve,” Baldwin said.

In light of this pending legislation and in honor of their service, Task & Purpose spokes to Elizabeth Cobbs, Ph.D. and author of The Hello Girls: America’s First Women Soldiers, about these incredible women who broke barriers and changed the course of history.

Task & Purpose: What exactly did the Hello Girls do during WWI?

Elizabeth Cobbs: The Hello Girls were America’s first female soldiers, meaning that they were the first women whose job in the U.S. Army was not to bind up the wounds of war, like nurses, but rather to advance the objective of winning the war as other soldiers, male soldiers, did previously.

This was the first time ever in world history that telephones were the primary means of communication between the very front lines and headquarters and supply depots and leaders. The Army communications would know secret codes in order to direct your call appropriately. She would be listening to see whether or not the call had been tapped. She would have to redirect the call if she couldn’t get someone else down the line to pick up — so she’d have to reroute calls manually.

Why was their work so valuable?

The telephone was this very specialized department that in retrospect seems kind of simple but was at the time a very high paced, high-pressure kind of occupation. You had to multitask. You had someone yelling at you in one ear, you’re writing down notes about where the connection is going, you’re looking for other lines that are flashing because other calls are coming in, you’re trying to see which calls have switched off — and they were doing this all at once. They found that women were better at it. Before the Hello Girls were recruited, the average male Army recruit could connect a call in 60 seconds. It took the average woman ten seconds. In wartime, the difference between 10 and 60 seconds is life and death.

Sometimes on a slow night when they weren’t handling tons of calls, the men would call these women to hear somebody’s voice — especially to hear an American woman’s voice. It was very comforting. One Associated Press reporter who had been exposed to wartime conditions said there was something about the operators’ voices — so calm, it was like you were still in New York or L.A. because it was just like an AT&T; operator — ”number, please” — and you felt like the world was going to be alright.

How were the Hello Girls recruited?

The Department of War sent press releases out to newspapers all over the country — tiny little newspapers in rural communities, big city newspapers. This call went out all around the United States and also into Canada because these women had to interact with French operators and they, therefore, needed people who were bilingual.

I’ve read articles from newspapers all around the country that said things like, “this is women’s chance to be in the regular Army and wear the uniform just like regular soldiers and take the oath…This is your chance to do as much in your own way as the men who go over the top” — “over the top” was a phrase used at that time to describe climbing out of your trench and going into the machine gun barrage that was what that horrible trench warfare.

Within several weeks, 7,600 women had applied for the first 100 jobs. This is remarkable because half of the men in the war volunteered , but all of the women did.

What was the greater political significance of what the Hello Girls did?

This was a test of women getting the vote. When the women arrived home, Congress had just passed the vote for women — on August 6, 2020, it will be the 100th anniversary of the ratification. The Hello Girls came home to a situation where states now had to ratify the vote. The women’s participation in the war, and their participation in victory parades was part of men saying “OK, maybe they deserve a seat at the table.”

Grace Banker was actually given the Distinguished Service Medal by the U.S. Army. Only 18 officers out of 16,000 eligible in the Signal Corps Officers, the communications branch, received that medal.

The Hello Girls also forged a path for women in the Army for decades to come. The Women’s Army Corps was created on May 1942, six months after Pearl Harbor, because the Army understood that women were going to be needed in their war efforts, period, because women had proven in WWI that the war couldn’t be fought without them. During World War II, the Army realized they had to get serious about bringing women into the military a way that’s routine, that honors them, that compensates them and gives them benefits.

And yet the Army still did not recognize the Hello Girls as veterans for 60 years.

The Army itself officially took the position that the women had not served, that they had been effectively civilian contractors. This was very odd because the women had never been given contracts. They had taken oaths and were told: “you’re in the Army now.”

They were acknowledged initially; about 30 women recieved commendations. But when they got home and applied for the financial bonuses available for soldiers who had gone abroad, they were told they were never in the Army. They were asked for their discharge papers and were told the papers were given weren’t valid. What’s more, the bonuses were pegged to how many days soldiers had served abroad, and the women generally went abroad before the men and the came home after them. The women served longer than most doughboys because they were in these logistical positions, and so the days they served would have been higher than most of the men on average. It wasn’t until 1979 that the women got their discharge papers.

The stories about what happened were so sad. One woman, for example, came back from France with TB. This tuberculosis was in her spine, vital organs, and lungs. She was declared totally disabled but the Army still fought her on being hospitalized in Army hospitals. The Army finally provided hospitalization, but I found a letter in her file from 1931 that stated this woman was no longer totally disabled and would no longer receive benefits. She died 8 years later and was buried at the age of 44.

After all this time, why is it important for the Hello Girls Congressional Gold Medal Act to pass?

I think because it’s after all this time. Our history gives us courage. History lets us know the challenges that people have overcome. It lets us know that Americans have collaborated despite their differences, that people across a diverse spectrum have carried important causes forward. In this case, knowing the story of women in the Army is helpful; acknowledging the importance of what they did will be very useful.

Whenever a medal is offered posthumously, you might say “who cares?” But to have the symbol of the people who started a process acknowledged is very important because I think those processes are what binds us as a nation. Showing where the idea that all people are created equal and that we can collaborate together to create a better world began gives people a sense of belonging and a sense of hope.