On Being Raped By My Commander

The word still sounds strange to me when I say it. Rape. And there is a small part of me... 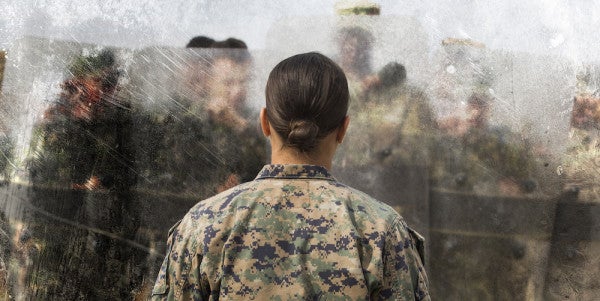 The word still sounds strange to me when I say it.

And there is a small part of me that still feels like I can’t claim this word as part of my own story, because it didn’t look like what I thought it would. Like many other women in the military who have been sexually assaulted, abused, or raped, I struggled with identifying as a victim. Like them, I carried around a burden of guilt and responsibility for years before really understanding what had happened to me. The healing came when I finally decided to share my story.

I was a brand new lieutenant. He was my company commander, a senior captain nearly 10 years older than I. Over the first few months as his freshly minted executive officer, he groomed me for subservience and complicity. I was young, naïve, and reeked of insecurity – an easy target for manipulation.

My commander was a cunning narcissist, sadistic and charming. Initially, his abuse was verbal and emotional. He thought affirmation made weak leaders, so he criticized and raged for the sake of making me better.

Then after a company basketball game, my commander lured me to his home. I blindly followed him. Eventually, he pushed me down on his couch, surrounded by smiling portraits of his wife and daughters. I tried to crawl away, afraid and confused. My mind felt disconnected from my body.

It couldn’t be rape. Rape happens in dark corners at alcohol-fueled parties, or while walking to your car alone at night. It would never happen to me because I would kick and scream and fight before someone hurt me. So I decided what had happened to me was my responsibility.

The verbal and sexual abuse continued for the next year and a half, including the 12 months we were deployed to Afghanistan. I was a shell of myself, suicidal and devastatingly alone, carrying a heavy burden.

It wasn’t until almost seven years later that I had the courage to share what I had been through with a small group of women at a healing retreat for combat veterans. Sharing with them allowed me to see that what had happened was not my fault, rather the actions of a sick man.But still, I couldn’t call what had happened to me rape. Other women had been abused worse than I had, hadn’t they? I didn’t want to claim something that wasn’t mine.

Then this year I learned the news that my former commander had been arrested for raping a teenage girl while he was a star pupil at ILE a few years ago, having been picked up for major double below the zone. Prosecutors cut him a deal – no prison time in exchange for a guilty plea. The news made me sick for days. But, my story finally made sense to me. I felt validated.

“You need to share your story. There are other women like you in the military who need to hear what you’ve been through,” my husband told me as I reeled from the news of my commander’s arrest. I knew he was right.

Vulnerability is terrifying. Sharing our dark struggles leaves us wide open for the masses to throw stones at our strength, or perceived lack of it. But something truly miraculous happens when we allow others the honor of hearing our stories, even the parts we don’t quite understand. Our shame cannot survive being talked about – it dies the moment we share it. And our authenticity frees others to own their stories, too. And that’s where the healing happens.

Meredith Mathis is a medically retired Army logistics-turned-Public Affairs Officer, having served in OEF in 2009-2010 and 2012. She recently published a book titled The Mountain Still Stands: A Young Soldier’s Battle for Peace in a Time of War. Meredith lives with her husband Tyler and owns a photo restoration business.