Army kicks off Sexual Assault Awareness Month with a cake-cutting ceremony, because of course 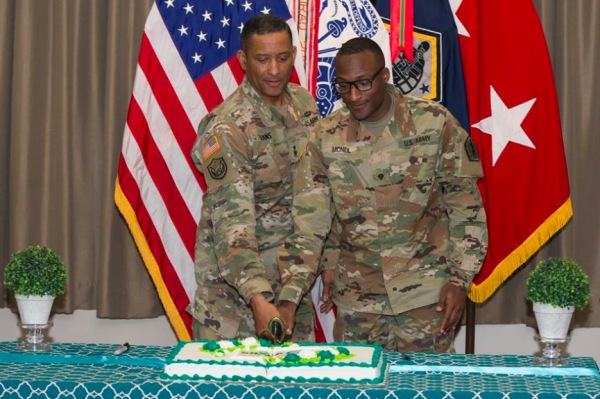 Birthdays, anniversaries, celebrations — these are all places one might expect to find a ceremonial cake cutting.

Places you may not expect to find cake, but are going to find one anyway, now apparently include the Army’s Sexual Assault Awareness Month kick-off event, because sure.

The Army’s Human Resources Command had a proclamation signing on Tuesday, according to its official Facebook page, to “reinforcing the fight against sexual assault and harassment.”

“U.S. Army Human Resources Command kicked off the command’s observation of #SexualAssaultAwarenessPreventionMonth with a cake cutting ceremony and proclamation signing,” the Facebook post reads. “This was the first of a number of events #HRC is conducting this month to highlight awareness and prevention of sexual assault and sexual harassment in the #USArmy.”

One Army reserve battalion commander, who spoke on condition of anonymity since she is still on active duty, told Task & Purpose that the ceremony is “tone deaf and insensitive,” and that she shared the Facebook post with other leaders, both men and women, who were all “baffled.”

“To have a ‘kick off celebration’ conveys the message that ‘this month we are serious about celebrating SHARP’ instead of the reality that SHARP is not something to celebrate,” she told Task & Purpose in an email.

“In my opinion, HRC missed a great opportunity to convey how serious this issue is and how it impacts our lethality and readiness. … Insincere action is almost worse than inaction because it conveys the message that ‘we are taking action only because we have to, not because we truly believe in it.'”

Sexual assault has continued to be a major issue in not just the Army, but across the services. It has been on the rise at the service academies — defense officials announced in January that sexual assault increased by 50% over two years at the academies. In April 2018, the Pentagon reported that the number of sexual assaults in the military had gone up almost 10% in one year — an 8.4% increase in the Army — but that the number of cases referred to courts-martial had declined.

The signed proclamation, provided to Task & Purpose, reaffirmed commitment to “fight against sexual harassment and sexual assault,” and recognized that “eliminating sexual harassment improves the quality of life for everyone in the Army family and reinforces a climate of trust and respect in which every member can achieve their full potential.”

But hey, what if we — hear me out on this — save the cake-cutting ceremony for when assault is on the decline, or even better: the very rare exception?

SEE NEXT: ‘Continuum Of Harm’: The Military Has Been Fighting Sexual Assault In Its Ranks For Decades, But Women Say It’s Still Happening