These are the least safe Army posts for female soldiers 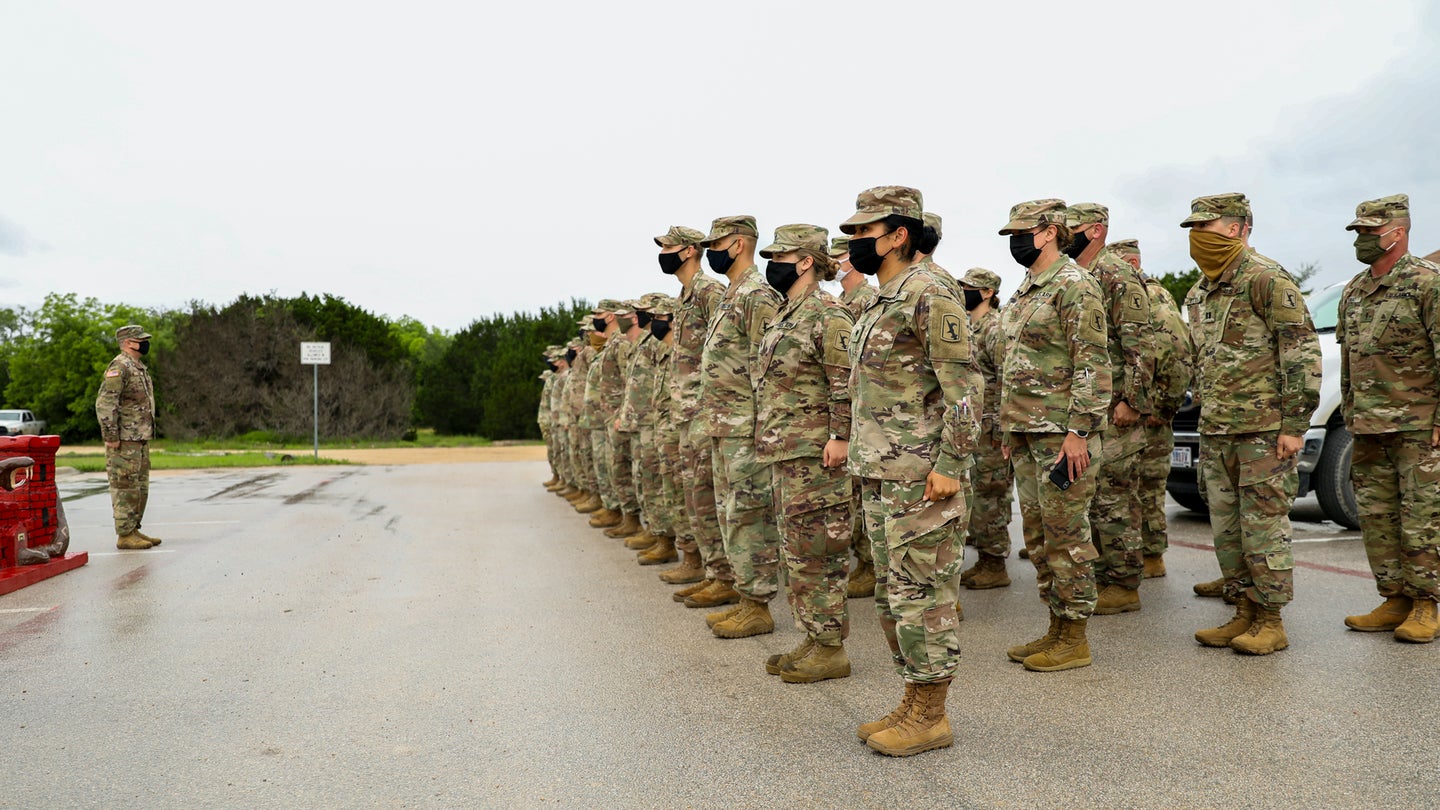 Capt. Roger Yant, company commander, addresses Soldiers with the Nebraska Army National Guard’s Headquarters and Headquarters Company, 67th Maneuver Enhancement Brigade, standing in formation prior to a promotion ceremony, May 23, 2021, during pre-deployment training at Fort Hood, Texas. The brigade is preparing for an overseas deployment to the Horn of Africa. (U.S. Army National Guard photo by Sgt. Lisa Crawford).
SHARE

Women in the Army have the highest risk of being sexually assaulted at Forts Hood, Bliss, Riley, Campbell, and Carson, in that order.

A new study released on Friday by the RAND Corporation looked at the risk of sexual assault and harassment for soldiers in the Army between August 2017 and July 2018 and found “considerable variation” for the risk to women at certain bases. Researchers said the average total sexual assault risk for Army women was 5.8% — meaning an estimated 5.8% of female soldiers were assaulted during that time — but several Army posts had a higher-than-average risk for women.

At Fort Hood, Texas, for example, the study estimated that of the 5,883 women serving there between August 2017 and July 2018, roughly 1 in 12 were sexually assaulted — around 8.4%. Meanwhile, the Pentagon had the lowest risk of sexual assault for women which could be explained by the age and rank of the women typically assigned to the Pentagon versus those at Fort Hood, according to the study.

“It is likely that women at the Pentagon are, on average, older, more senior-ranking, more highly educated, and might have other personnel characteristics associated with lower total sexual assault risk,” the study says.

The average risk of sexual assault for men during this same timeframe was 0.64%. One Army post, Baumholder H. D. Smith Barracks in Germany, had “a high probability” of having a greater-than-average sexual assault risk for men.

The researchers also ranked Army posts through another method, looking at the adjusted sexual assault and harassment risk, in which they compared posts with similar soldier demographics. While some of the installations with the highest adjusted risk of assault for women are different than the total risk, Fort Hood and Fort Bliss are still the top two installations that pose the highest risk for women.

It’s not particularly surprising that Fort Hood is at the top of the list; it’s the Army’s largest post, and  an independent panel’s review of the installation last year put a spotlight on its harmful culture toward women. The review found a “clearly identified high risk” of sexual assault for women that was “known or should have been known by command leadership at all echelons.”

“Numerous female soldiers reported that it is a daily battle to get through the day without allowing the multiple advances from male soldiers upset them. They explained that male soldiers routinely, openly, aggressively and relentlessly approach female soldiers,” the Fort Hood Independent Review Committee’s report said.

The report forced self-reflection among Army leaders. Although it looked at Fort Hood specifically, it was widely acknowledged in the Army that the same problems at Fort Hood were likely present at other installations throughout the force. Since then, the Army has vowed to overhaul its sexual harassment/assault response and prevention program and relentlessly messaged the “This is My Squad” initiative from Sgt. Maj. of the Army Michael Grinston, which is meant to improve unit culture.

Men saw a 6.5% risk of harassment during the same time period, with the risk being highest at Baumholder H. D. Smith Barracks.

Ultimately, the study encouraged the Army to use the data it found to focus its prevention efforts.t said the Army may benefit more from “closely monitoring sexual harassment risk as an early warning indicator of sexual assault risk.” Sexual harassment, the study explained, “often occurs in public or in larger groups of soldiers,” which means there is a greater possibility of soldiers being able to provide more information about it than there is for sexual assault.

Studying sexual harassment risk “is likely easier, cheaper, and potentially faster than measuring sexual assault risk,” the study said. “And it could provide nearly all of the information about sexual assault risk that is needed to develop tailored intervention programs.”

The study also suggested that the Army consider “climate-improvement interventions” for installations and commands with high risk of assault and harassment, because “where the unit and leadership climate is better, soldiers face lower sexual assault risk and lower sexual harassment risk.”

Watch next: Military sexual assaults have reached a four-year high as the Pentagon downplays its failures