"I posted it and I wasn’t thinking.” 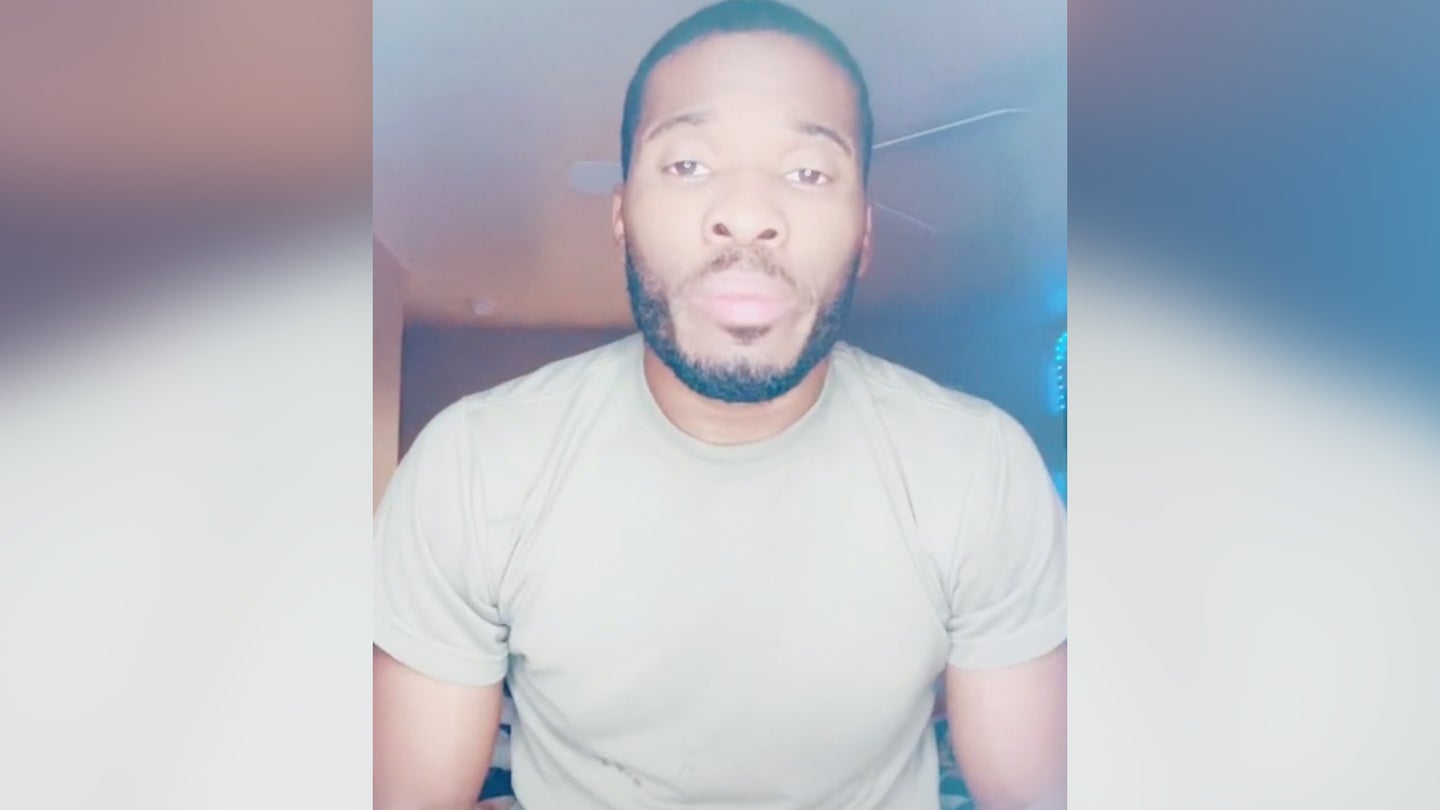 The video was posted earlier this month by Spc. Thomas Gallomore, who goes by the username @dont_mindg on TikTok. The video has since been removed, but clips of it have been shared on YouTube and by other TikTok accounts. The video shows someone moving with their Army combat uniform pants around their ankles. Across the top of the video was the caption, “When she need a [Army Achievement Medal], to pick up E6 [staff sergeant].. and 1sg [first sergeant] say meet him in the office.”

Gallomore is assigned to 11th Signal Brigade at Fort Hood, Texas, and though he is wearing sergeant’s rank in one of his videos, a III Corps spokesman confirmed that he is a specialist. His chain of command began taking action “immediately” upon learning of the video, said Sgt. Maj. Jeremy Crisp, a spokesman for III Corps.

“SPC Gallomore’s chain of command was made aware of the TikTok video on 7 January, and the nature of the content was pushed down through command channels for action,” Crisp said. “SPC Gallomore was directed to take down the video and he complied. The command has initiated a formal investigation into this incident.”

Online, the video drew criticism for making fun of “quid pro quo,” a type of sexual harassment identified in Army Regulation 600-20 that includes “demanding sexual favors in exchange for a promotion, award, or favorable assignment.” Efforts to reach Gallomore for comment on TikTok and through his chain of command were unsuccessful. He has since posted an apology “to all the women that felt disrespected by my video … ‘cause I posted it and I wasn’t thinking.”

Fort Hood has been at the center of the Army’s efforts to improve its sexual harassment and assault response and prevention (SHARP) program, after it was found to be in disrepair during an independent review in 2020. The review, conducted by a team of civilians, found that the command climate at Fort Hood was “permissive” of assault and harassment, and leaders often failed to intervene despite knowing the risk of assault and harassment was high.

Since then, the Army has started enacting new policies aimed at addressing gaps in the SHARP program, at Fort Hood and beyond. And Fort Hood specifically has started making changes to improve its SHARP program and the culture on the installation, many of which are among the 70 recommendations made by the civilian panel at the conclusion of their review.

“If I knew that video would give off those kinds of vibes, I would have never posted it,” Gallomore said. “I accept full responsibility because I know sexual assault and sexual harassment happens in the military.”

It remains unclear who made the original video. Gallomore claimed in another video over the weekend that he re-posted the video but did not make it, and that he was scrolling through TikTok when he saw it and decided to share it with his more than 130,000 followers.

“I’m like ‘Wow, people are really posting this on TikTok.’ I shared it, reposted it, with no caption. Should I have put a caption? Maybe, but I didn’t,” Gallomore said. In response to a comment on the same video asking what he meant by posting it, he responded, “I literally said ohh shxt [sic] someone really posted this, it’s about to do numbers.”

The video started gaining traction after it was called out by another Army specialist on TikTok who goes by the username @_the_joel_ and who typically posts humorous videos about her job in the Army and military life more broadly. Many of her videos also address mental health awareness and what it’s like being a woman in uniform. While her original video criticizing Gallomore’s TikTok post has since been taken down, a Reddit post about the issue said her video “kept it tactful and professional.”

Joel said a noncommissioned officer from another installation reported her account to her chain of command after she called out Gallomore’s video, saying she was “making a mockery of the Army.”

“My leadership said ‘perception is reality,’” she said, adding that she was told to no longer post videos in uniform. While she briefly removed videos in uniform from her profile, the orders from her chain of command appear to have been rescinded and the videos have been added back to her account. Efforts to reach her over TikTok by Task & Purpose were unsuccessful.

Other military TikTok accounts got involved in the situation as well. One Army noncommissioned officer said it was worse that Gallomore said he reposted the video but didn’t make it, and criticized “this bullshit leadership philosophy of ‘perception is reality’” saying “that’s old, that’s outdated, and it does not work.”

Another TikTok influencer and Marine Corps veteran, Savannah Glembin, also raised the issue, saying in the military “we are told if we see something to say something.”

“What kind of message does it send when you try to silence young military members who call out the very behavior that you say that you do not want in the military?” she said. “Not a good one in my eyes.”

While TikTok has become an increasingly popular social media platform, for both younger and more senior service members, it has also brought along plenty of trouble for the military. One soldier, for example, was separated after posting a video making a Holocaust joke. And last year, a NCO at Fort Hood aired allegations of toxic leadership in two TikTok videos.

But the platform can also bring to life the sometimes-humorous and oft-monotonous everyday routine of serving in uniform — like the time soldiers recorded themselves trying to get a raccoon out of their Stryker vehicle.

Ultimately, Joel said the issue at hand is not about her and Gallomore specifically, but about a culture in the military that is “a prevalent and detrimental issue some people experience before they even put the uniform on.”

“I’m hoping the military can extract this display of poor leadership and a display of profoundly poor character and do something about it,” she said.