The crews "wanted to show support to the American medical workers who, just like military members in a time of war, are fiercely running toward the fight," Trump said. 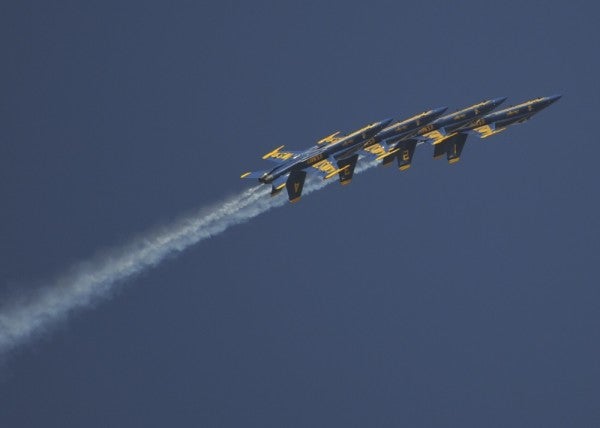 The Navy Blue Angels and Air Force Thunderbirds are due to fly over multiple cities across the country both together and separately as part of a show of support for the health care workers fighting novel coronavirus (COVID-19), President Donald Trump announced Wednesday night.

Operation America Strong, Trump said, would involve “air shows” over a range of cities that would serve as “a signal to all Americans to remain vigilant during the outbreak.”

Senior defense officials told the Washington Post that there would be no formal “airshows,” as Trump described them; instead, there would simply be flyovers, and the pilots will avoid flying over areas where people can congregate.

According to the Post, the mission was conceived by senior military officers in the Pentagon as a nonpartisan show of resolve.

“This is just a sincere thank-you,” one official said. “It’s one way to acknowledge those who are pitching in.”

The announcement comes shortly after the Blue Angels and Thunderbirds were spotted flying together over Pensacola Beach in Florida on Tuesday, the Orlando Sentinel reported.

The appearance reportedly disappointed fans in Philadelphia and New Jersey, who were hoping for a flyby over their area after a memo circulated on the internet that appeared to show a flyover scheduled for Wednesday.

A Blue Angels spokesman told The Philadelphia Inquirer on Wednesday that “no flyovers had been authorized” in the Philadelphia area, that the demonstration teams must give municipalities 48 hours notice before any-such flyover is authorized, and that any such event would be “well-advertised” by the military.

But beyond Trump’s announcement, Operation America Strong does not yet appear to be well-advertised. As of 10:15 a.m. on Thursday morning, neither the Blue Angels nor the Thunderbirds had announced the mission on their websites or social media pages.

Indeed, a Thunderbirds spokeswoman told Task & Purpose on Wednesday night shortly before Trump's announcement that “there are no approved or planned joint air shows at this time,” and that for future operations, “the Thunderbirds will release information on our official website and social media platforms 48 hours prior to any event.”

In his announcement, Trump did not say when Operation America Strong would officially begin. The tour may have already started, since the Thunderbirds flew over Las Vegas, the Air Force Academy commencement ceremony and several cities in Colorado last week.

“Operation America Strong was the idea of our great military men and women — the Thunderbirds and the Blue Angels crews who wanted to show support to the American medical workers who, just like military members in a time of war, are fiercely running toward the fight,” Trump said on Wednesday. “It’s going to be great.”