Listen to Trump, Esper, and Milley speak straight to troops and their families about COVID-19

"We are at war," Gen. Mark Milley said. "It's a different type of war, but a war nonetheless." 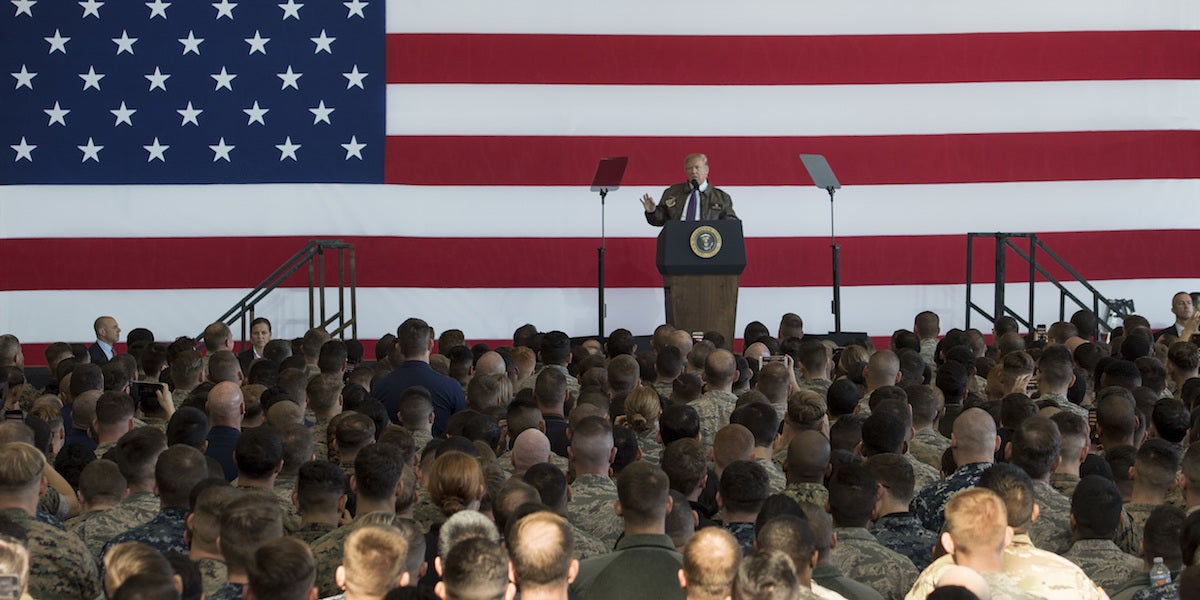 On Wednesday, U.S. troops and their families had the opportunity to hear from and ask questions of President Donald Trump, Defense Secretary Mark Esper, and Joint Chiefs Chairman Gen. Mark Milley, on a conference call regarding the novel coronavirus (COVID-19).

“We are at war,” Milley said. “It's a different type of war, but a war nonetheless.”

Task & Purpose was not on the call and did not enter into any agreement that it would be off-the-record. A recording of the call was provided to Task & Purpose, and is being published to provide service members and their families the ability to hear remarks straight from the president, and top military leaders — especially considering many were unable to join, which had thousands of people listening in.

During the 20-minute phone call, service members were able to ask the military leaders questions about the current situation, though Trump was the only one who answered. One Navy corpsman asked Trump how the virus is going to “impact the nation long-term.”

“I actually hope, Justin, that it's going to make the nation stronger long-term, because we've never been through anything like this. The last time was really 1917 for this kind of a level, and you know how bad that was … We think our nation is going to be — and I really believe this — hopefully stronger. … A lot of great things have happened,” Trump said.

“There's tremendous spirit in the country and I think that in the end, it's a great question, 'how will it impact.' Obviously, financially — we had the greatest economy in history, and all of a sudden …. we go from the greatest in history, to 'Everybody stay home, you can't go out.' And we have to kill it, we have to kill our economy. I think it's going to come bouncing back very, very quickly. Let's see if I'm right.”

The final question went to the spouse of an 82nd Airborne Division soldier at Fort Bragg, who asked if there was any additional information that could be provided to families being impacted by extended deployments due to the virus.

Her question wasn't actually answered — Trump instead spoke about the work being done on vaccines, and other drugs being tested.

Near the end of the call, Vice President Mike Pence joined Trump, saying their “hearts are with all the families on this call as well.”

Listen to the full call below: