Buckle up, pandemic-stricken Americans: the U.S. military's premiere demonstration teams are on a mission to brighten your day while you're stuck at home amid the collapse of society. 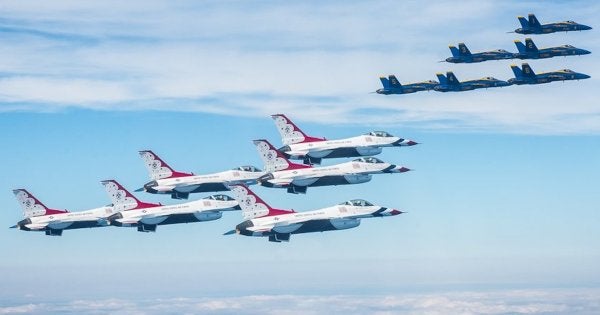 Buckle up, pandemic-stricken Americans: the U.S. military's premiere aerial demonstration teams are on a mission to brighten your day while you're stuck at home amid the collapse of society.

The Navy Blue Angels and Air Force Thunderbirds will conduct a series of high-profile flyovers of American cities in the coming weeks in a show of solidarity with health care workers currently battling the novel coronavirus (COVID-19), President Donald Trump announced on Wednesday.

“What we are doing is paying tribute to our front-line health care workers confronting COVID, and it's really a signal to all Americans to remain vigilant during the outbreak,” Trump said.

While a nice sentiment, a high-flying version of “thank you for service” for healthcare workers isn't what Americans need right now, considering the nation's collective anxiety over the 850,000 and counting who have been infected with COVID-19 and nearly 50,000 who have died from it, not to mention the Great Depression-level increases in unemployment claims over the past few weeks. And this is to say nothing of those healthcare workers who, at places like the Veterans Affairs hospital system, simply want more equipment — lots more.

What Americans need right now is tangible help, from personal protective equipment and ventilators to economic relief. And while the flyovers, announced under the uber-patriotic moniker of 'Operation America Strong,' reflect a noble sentiment in honoring the heroes who are working day and night to beat back the spread of the deadly virus, there's a problem: they are, fundamentally, bullshit.

To start, flyovers cost America money. According to the Washington Post, each flight hour for the Blue Angels and Thunderbird squadrons costs at least $60,000; with flyovers planned for at least 22 cities between both squadrons, that's a rough cost of at least $1.32 million — enough to purchase dozens of ventilators at, say, $20,000 a pop.

To be fair, this isn't money that's suddenly being allocated to flyovers out of nowhere: one unnamed military official told the Post that “the cost of the flights will come from money already in the Pentagon budget,” while The War Zone rightly notes that both Blue Angel and Thunderbird pilots and their support personnel still need to constantly train to maintain their proficiency with the aircraft.

“Whether they are in or working on gray or colorfully painted jets doesn't change that,” as The War Zone's Tyler Rogoway notes. “Why not at least use that flight time to spread a positive message and give people a little joy in what has been bleak and uncertain period?”

Perhaps it's less a matter of cost and more a matter of symbolism. If the goal is to send a message of support and solidarity to front-line workers, wouldn't a better sign involve putting more of the 27,000 former soldiers who volunteered to come back into the service to good use? Or answering the call for an influx of personal protective gear to, say, those VA hospitals that are currently struggling without?

Nobody wants tributes; everyone wants masks, and lots of them.

“Ensuring that VA medical facility staff, as well as clinical and administrative employees, have the appropriate PPE to protect their health and the health of the veterans they serve is essential to countering the pandemic,” a group of senators wrote in a letter to VA Secretary Robert Wilkie this week. Busting out the Blue Angels and Thunderbirds, while entertaining, is not.

Maybe I'm cynical, but the prospect of sending brightly-painted fighter jets to buzz cities in states that are under shelter-in-place orders anyway seems like less a symbol of constant vigilance against Trump's “invisible enemy” and an odd embodiment of America's lopsided spending priorities, a weird spasm of military might against a foe no fighter jet can ever defeat.

Andrew Blum points this out nicely in The New Republic:

Earlier this month, the Pentagon inked a contract to pay $818 million to Lockheed for hundreds of new extended-range, air-launched cruise missiles with thousand-pound explosive warheads. By then, Americans had learned that America’s Strategic National Stockpile—the federal emergency medical supply cache, whose annual budget is less than that missile contract—faced critical shortages of ventilators and even N95 respirator masks, which retail (in ordinary times) for 60 to 80 cents.

“How many of the 4,000 nuclear weapons that the United States will spend $50 billion on this year (and next and next and next) would you trade for enough ventilators, masks, ICU beds, and test kits right now?” arms-control expert and former Obama national security aide Jon Wolfsthal had tweeted in late March. It shouldn’t be a purely rhetorical question. The Department of Defense’s budget is three-quarters of a trillion dollars; the rough amount it spent on Lockheed’s cruise missile contract alone “could buy 20,000 high-end ventilators,” as defense technology writer Kelsey Atherton points out.

Make no mistake, joint flyovers from the Blue Angels and Thunderbirds may appear a welcome distraction from the daily grind of America's battle with coronavirus, but that's exactly what they are: a distraction. Rome had it's bread and circuses; it also had the Antonine Plague. And while Trump, with his love of military parades and the valorization of service members, may see this as a welcome tribute to the next generation of heroes, it's sound and fury is actually exactly that: signifying nothing.