Thunderbirds, Blue Angels flyovers to begin next week and continue into May

"These flyovers will incur no additional cost to taxpayers," officials said. 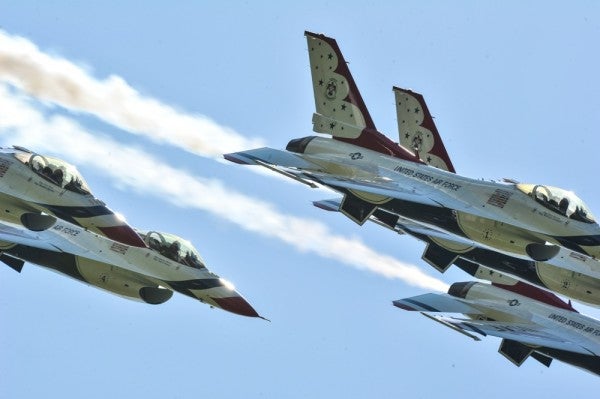 Senior Air Force and Navy officials announced new details on Friday about a series of flyovers to be conducted by the services' premier flight demonstration teams in honor of health care workers fighting the novel coronavirus (COVID-19).

Operation America Strong, which was first announced by President Donald Trump on Wednesday, will start next week and occur every one-to-two days until mid-May, wrote Gen. Dave Goldfein, Chief of Staff of the Air Force, and Adm. Michael Gilday, Chief of Naval Operations in a joint statement.

“We’re excited to fly over cities across America as our way of saying thanks to the healthcare workers, first responders, and all the people who selflessly run into the breach working to keep America strong,” the officials said. “This is also our way of showing that we are all in this together and that America’s spirit will prevail.”

It remains unclear where exactly the two teams will fly. Goldfein and Gilday wrote that there will be both joint and individual flights over areas of the country “hardest hit by COVID-19,” and that more information on dates and locations would be provided soon.

“In order to reach the maximum number of Americans, some portions of America Strong will feature only the Blue Angels or the Thunderbirds, while others will include both teams flying in their signature Delta formations simultaneously,” they said.

The teams have partnered with local governments and media outlets to make sure spectators follow Centers for Disease Control and Prevention social distancing guidelines, the announcement said. The teams will also use air-to-air refueling during transit, and have no scheduled stops en route to reduce potential exposure to the virus.

'No additional cost to taxpayers'

The announcement also seemed to respond to public criticism (including from Task & Purpose) that the flyover tour is a waste of resources during a pandemic.

The operation “fulfills critical training requirements for both teams,” the announcement said. “Pilots must execute a minimum number of flight hours to maintain proficiency. These flyovers will incur no additional cost to taxpayers.”

The Blue Angels and Thunderbirds usually perform more than 30 airshows a year, but the teams have had to cancel many performances due to COVID-19, the announcement said.

Earlier this week, fans of the teams were delighted to see them training together over Pensacola Beach, Florida, where the Blue Angels are based. Love it or hate it, it looks like Americans across the country will get to see more of them soon.