In The Army, Sexual Harassment Training Is Now Literally A Game

Digital gaming sales hit a record $61 billion dollars in revenue worldwide in 2015. Compare that milestone with the global... 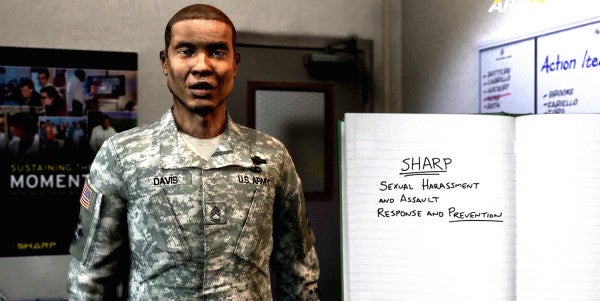 Digital gaming sales hit a record $61 billion dollars in revenue worldwide in 2015. Compare that milestone with the global music industry, which set its own record by dropping below $15 billion in sales for the first time in decades. Or the absolutely revolting statistic that only 70% of Americans have read a single book (not even in its entirety, just picked up and skimmed and then put back down) in the past year. Anyone who refuses to admit that we’re living in a shared media environment that’s dominated by gaming and the Internet is probably being willfully obstinate.

Lucky for America, acting Army Secretary Patrick Murphy and Army Chief of Staff Gen. Mark Milley aren’t deluding themselves. Late last week, the two announced the launch of ELITE-SHARP, an interactive training game meant “to train junior officers and non-commissioned officers, on how to conduct more effective counseling” during a ceremony at the Pentagon to kick off the Army’s Sexual Assault Prevention Month. As Army Times reported, command teams will train with ELITE-SHARP by using an avatar to navigate animated sexual assault and harassment scenarios. It’s sort of a “choose your own adventure” type simulator, where soldiers pick better and worse ways to respond to situations. Probably the most important aspect of the game is when commanders get to interact with virtual victims of assault and harassment.

I admit, when I first heard about it, I was pretty skeptical. I’ve never been a huge fan of the SHARP (Sexual Harassment and Assault Response/Prevention) acronym, and ELITE (Emergent Leader Immersive Training Environment) is just as silly. Acronyms for serious programs that spell out dumb words — insidious hybrids between mind-numbing military bureaucratic jargon and cheesy marketing newspeak — always seemed maladroit to me.

Also, the first thing I thought of when I saw stills from the program was the Amy Schumer sketch where she tries to play her boyfriend’s first-person shooter game, but her female character ends up getting sexually harassed, is made to fill out reams of paperwork, gets her character impugned, and eventually sees her attacker’s sentence thrown out by his commanding officer. In other words, my initial reaction to ELITE SHARP was something like, Great, another dumb box-checking project so the brass can say they’re doing something about the problem of sexual harassment and rape without actually having to change the structural impediments that are preventing real progress.

But, I’ve actually come around to it. The gaming world is the water we swim in. Gaming is people’s preferred mode of symbolic interaction with the world, more engaging than PowerPoint presentations and more accessible for most people than books. I had to put my own biases as a bookworm aside and see games as simply ways to explore and interact with narrative structures. By that I mean simply that games are the predominant mode in which Americans tell each other stories. It’s not just entertainment. A few years back the Smithsonian had an exhibition presenting video games as art. They’re used as political protest, as therapy to help with depression and anxiety, and have even been predicted to be the basis of new religions.

And to be fair, simulations are already used to train soldiers in combat skills. They have been for a long, long time. In the early 1980s, there was some interest by U.S. Army Training and Doctrine Command in teaming with Atari to create a Bradley simulator. Interest continued through the 1990s, but didn’t become codified in until later in the decade.

As Christian Beekman writes for Task & Purpose, back in 1997, Gen. Charles Krulak, then-commander of the Marine Corps, went as far as issuing a directive, Military Thinking And Decision Exercises, which directly supported using PC games for training. That directive paved the way for other branches to build training games with software developers. And now simulations and games are used all the time to train combat and logistics and force-planning skills. And although more data on the effectiveness of military simulators needs to be collected, the civilian numbers we have from truck driving simulators have indicated some pretty positive trends. In one case, simulators reduced accident rates by 20%. In other words, ELITE-SHARP isn’t a novelty. It’s part of a lengthening tradition of cutting-edge, cost-effective training.

So the question then becomes “Will it actually work?” That obviously remains to be seen. There’s no way it will be a magic bullet, but it certainly can’t hurt to implement the program. Sexual harassment is still a huge problem in the military. It confronts us with the chicken-egg problem of creating new rules and regulations in order to change military culture versus changing organizational cultural habits in order for those rules and regulations to be adhered to. We might as well throw everything we can at the wall and see what sticks. Something important to keep in mind is that these things take time. Why shouldn’t the Army use every tool at its disposal, even if said tools have dumb names?