The military’s recently released sexual assault report showed that an estimated 14,900 service members were sexually assaulted in 2016, a... 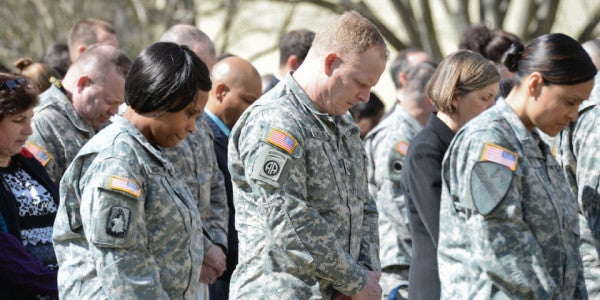 The military’s recently released sexual assault report showed that an estimated 14,900 service members were sexually assaulted in 2016, a rate of more than 40 every day.

The military conducts regular surveys on sexual assault in the armed forces, and this latest report bears some encouraging signs.

In 2016, the total number of sexual assaults in the military declined by more than 5,000, reaching a 10-year low. Pentagon officials said that the decrease is not attributable to a specific variable, but rather are the result of, “noted enhanced efforts at communication, prevention and an institutionalization of policies aimed at countering assault,”the CNN report said.

And when reports went up in 2016, so too did disciplinary action against the assailants. In 64% of reported sexually assault cases, commanders had “sufficient evidence” to take action, the CNN report said. Nearly 60% of those cases resulted in court-martials.

Ultimately, 4.3% of women and 0.6% of men in the armed forces reported “experiencing some form of sexual assault in the year prior to being surveyed.”

But there’s a lot to be angry about, as well.

Nearly 60% of service members who reported their sexual assaults then faced some sort of reprisal. One third of women and 40% of men said they regretted reporting their assault.

In all, it’s difficult to imagine, difficult to stomach the thought of 40 service members being sexually assaulted every day, often by fellow members of the military, people who are supposed to be brothers and sisters. And yet, among the rank and file, there doesn’t seem to be much grassroots interest in the issue. It’s largely ignored.

That’s something that just has never sat well with me, especially considering the size and scope of the problem. In contrast, there is a large amount of understandable and justifiable passion within the military and veterans community surrounding the high rate of suicide in the veterans community. Among the more than 21 million veterans in the United States, 20 veterans commit suicide every day, a recently revised number from 22 a day that was the subject of ruck marches and nonprofit organizations. As it should be. But one bit of cognitive dissonance I’ve never understood relates to the rate of sexual assault in the military. Where is the grassroots interest? More than 40 service members are sexually assaulted in the military every day, among a population much smaller than the total veterans community — there are roughly1.4 million service members on active duty — about 500,000 soldiers, a little over 300,000 sailors, roughly 330,000 airmen, and over 180,000 Marines.

But the grassroots interest could be changing. In the Marine Corps in particular, from the command level, there’s more interest in preventing sexual harassment and sexual assault than ever before.Brennan’s story prompted the creation of a task force headed by the Assistant Commandant of the Marine Corps, Gen. Glenn M. Walterso.

That command-driven effort, paired with the positive numbers in this latest report, leave room for optimism. But like suicide, the target number for sexual assaults is zero, and sitting at 14,900, that seems quite far away, indeed.